Liverpool’s win over Newcastle United helped them to 40 points on Premier League 2021-22 table, one behind leaders Manchester City. Newcastle, with just a win, are in the relegation zone. 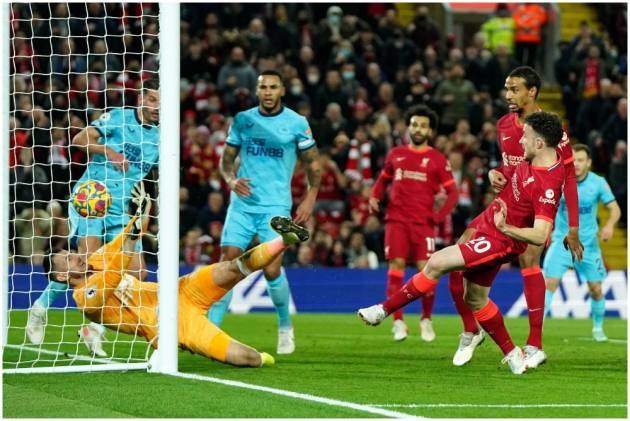 The England right-back took a touch and smashed a shot from 25 meters high into the net in the 87th minute at Anfield, adding to first-half goals by Diogo Jota and Mohamed Salah.

“I’ve been waiting for that for five years now, waiting to hit it clean like that,” Alexander-Arnold said. “I’ve had a few from the edge of the box and I’ve dragged them and things like that. I’ve caught that one sweet and it’s nestled in the top corner.”

Salah’s goal, his 15th in the league this season, wasn’t so rare and he has now matched Leicester striker Jamie Vardy’s record of scoring or setting up a goal in 15 straight Premier League appearances.

Newcastle had taken a surprise lead in the seventh minute through Jonjo Shelvey, a former Liverpool player, and might have been unlucky to concede the equalizer scored by Jota in the 21st.

Newcastle midfielder Isaac Hayden was on the ground on the edge of the six-yard box, apparently with a head injury, as Jota scored from a rebound after his initial header was saved by Martin Dubravka.

“The game turns on a decision I can’t understand,” Newcastle manager Eddie Howe said. “The game should have been stopped. I can’t believe (referee) Mike (Dean) hasn’t stopped the game — Isaac was holding his head and we had two players down.”

Liverpool returned to within a point of City, which thrashed Leeds 7-0 on Tuesday, and moved three clear of third-place Chelsea, which was held 1-1 by injury-hit Everton on Thursday.

“I didn’t expect Chelsea would drop points, it is pretty rare,” Klopp said. “I don’t know five or six players of the Everton lineup so to get a point at Chelsea is massive.” Newcastle stayed in next-to-last place and has only one league win all season.