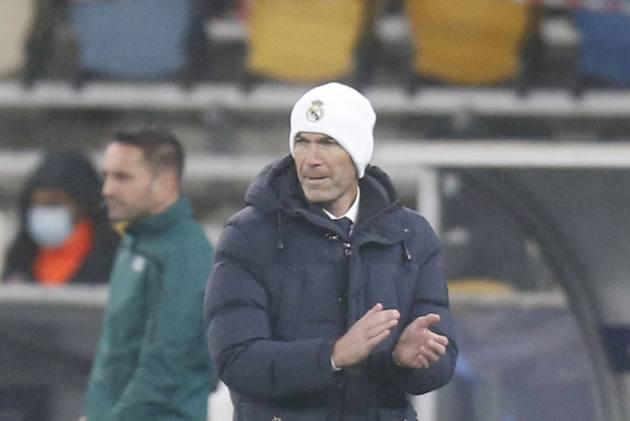 Real Madrid must perform at "maximum intensity" to get past Liverpool and reach the Champions League semi-finals, head coach Zinedine Zidane has warned. (More Football News)

Los Blancos claimed a 3-1 first-leg win in Spain thanks to two goals from Vinicius Junior and one from Marco Asensio, with Mohamed Salah grabbing an away goal for the Premier League champions.

Liverpool famously recovered from a 3-0 deficit to knock Barcelona out of the semi-finals two years ago, but that was one of just two out of 13 occasions in which they have progressed after losing the first leg of a European tie by two goals or more.

Madrid have only lost one of their previous 16 knockout ties when winning the first leg by such a margin, while they have scored at least one goal in each of their past 23 games in the competition beyond the group stage.

With history seemingly on their side, and following an impressive 2-1 win over Barcelona that lifted them to within a point of LaLiga leaders Atletico Madrid, Zidane's side could perhaps be forgiven if they are unable to match the same level of effort at Anfield.

However, Zidane is not prepared to accept any such compromise in their standards, nor to begin prioritising one competition over another.

"We don't think like that. We only have this game with Liverpool in our heads. We want to go through," he told reporters.

"We're not going to waste our resources. Real Madrid always go out on the pitch to win. We've used so much energy against Liverpool and Barcelona but we're going to have to play at our maximum intensity again, and we're ready for that."

Madrid will be without Eden Hazard, Sergio Ramos, Raphael Varane, Dani Carvajal and Lucas Vazquez, with Federico Valverde battling to be fit and several players admitting to being tired after the wins over Liverpool and Barca in a gruelling week.

"The team is always united against difficulties," said Zidane. "This shows the character they have. It's a very strange season for many reasons. But we can't do anything other than recover well. We'll keep going until the end.

"We know what type of game we have coming up. What we are going to try and do is continue what we're doing and compete as a team. We're going to need to compete and attack well as a unit. We're ready for this return leg."

With Carvajal and Vazquez sidelined, Zidane is expected to choose between Valverde – nominally a midfielder – and Alvaro Odriozola at right-back on Wednesday.

"Fede has recovered and he's at 100 per cent with the team. We'll see tomorrow how we use him," Zidane said.

"Odriozola has played little, it's true, but now I'm not going to say anything about the team."