Liverpool Vs Wolves Live Streaming: Diogo Jota Reunion In Focus - When And Where To Watch

Diogo Jota is looking like one of Jurgen Klopp's best signings for Liverpool already, as his scoring exploits continue to make history. Check match and telecast details of Liverpool vs Wolves clash 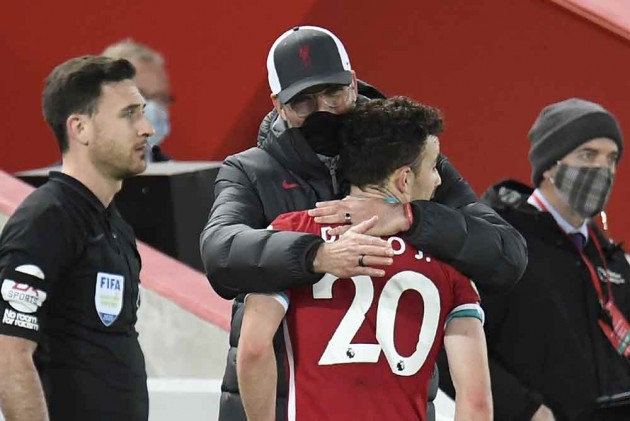 Liverpool supporters will have their first opportunity to acclaim last season's champions when Wolves visit on Sunday, and perhaps Diogo Jota will briefly have to take a back seat for the first time since his Anfield arrival. (More Football News)

A crowd of 2,000 is expected on the first weekend since March that fans have been allowed into Premier League grounds, with Liverpool having scooped the title during the pandemic lockdown months, ending a 30-year wait.

It means those players who drove Jurgen Klopp's side to glory will be the focus for many, but Jota has made such an impact since arriving to strengthen the ranks that he is unlikely to go unappreciated.

Well, for what it's worth, Jota is dropped!

Given Wolves are his former club, the evening clash is bound to be a special occasion too for the Portuguese forward, who has made a dazzling impact in his short time at Liverpool.

Jürgen Klopp is looking forward to the return of fans to Anfield on Sunday and believes the 2,000 in attendance can have a positive impact on our clash with @Wolves#LIVWOL

With a goal on average every 96.8 minutes in the Premier League - five in 484 minutes - Jota cannot be accused of being a slouch in getting off the mark in his Anfield career.

He has nine goals in 15 appearances across all competitions, and only three players have ever made faster starts with the Reds over the same span of games - Robbie Fowler (12 goals), Daniel Sturridge (11) and Cyril Done (10), a post-war poacher who later played at Tranmere and Port Vale.

Of the players set to be on show on Sunday, Jota has the best goals-per-minute record in the top flight this term, although team-mate Mohamed Salah (97.88) runs him close.

Wolves have nobody who can touch those numbers, with their leading scorer Raul Jimenez (four league goals at one every 206 minutes) ruled out of the trip after the serious head injury he sustained last week in the victory at Arsenal.

Jota was only scoring at one goal every 328 minutes last season with Wolves in the Premier League, making these early-season efforts for Liverpool all the more eye-catching.

Already the first player in the club's history to score in each of his first four home league games, could he extend that to five?

Only three players have scored in their first five home games for a specific club in the Premier League - with Jota looking to follow Jermain Defoe for Portsmouth (five successive games), and the Newcastle United pair of Les Ferdinand (six games) and the remarkable Alan Shearer (15 home games in a row).

What a carry on!

Opta defines a carry as any movement of the ball by a player which is greater than five metres from where they received the ball.

Jota brings value in this important area, but these are early days in his Liverpool career and his impact may be more recognisable later in the campaign.

He has had 78 carries so far, which is exactly the same number as Roberto Firmino, his apparent chief rival for a regular start.

Firmino has played 319 more minutes than Jota in the Premier League, however, and has an average of only 8.7 carries per 90 minutes, against Jota's 14.5, which is an increase of 0.2 on his number with Wolves last season.

Sadio Mane manages an average of 15.8 carries per 90 minutes, while Salah is producing 13.4 carries across the same time span.

Jota's carry distance per 90 minutes stands at 186.6 metres, compared to 199.2 with Wolves in 2019-20, and his carry progress upfield per 90 minutes has dipped from 149.8m last term to 109.5m in Klopp's team, but that differential may be because of an adjustment in his role and responsibilities.

Liverpool's top three ball carriers this season, in terms of their average number per 90 minutes, have been Jordan Henderson (20.8), Joe Gomez (18.6) and Andrew Robertson (17.6).

4 - Diogo Jota is the first player in Liverpool's history to score in each of his first four home top-flight league appearances for the club. Fantastic. pic.twitter.com/AcQ1za4mYE

Heads-up on a Liverpool weakness?

What might be remarkable, looking at Liverpool's four main attackers, is who has been winning the most headers this season.

Mane leaves Jota lagging in this department, winning 15 of 28 aerial battles compared to four of 22 for the new boy, who stands a good inch taller than the 5ft 9in Senegalese forward. Mane won only 41 of 116 such duels last season, suggesting he has found an extra spring in the early months of this campaign.

It is not an area where Liverpool's current group of forwards excel, with Firmino (winning three out of 27) and Salah (two of 16) also easily bossed around in the air.

Wolves coach Nuno Espirito Santo used Jota mainly as a left-sided forward, and his touchmap from last season compared to this shows how his role at Liverpool has differed.

Given he has figured in roles across Klopp's frontline so far, it is no surprise to see Jota seeing plenty of action in areas of the pitch he rarely visited in Wolves' black and gold.

This term he has had 34.41 per cent of touches in that same left channel in the opponents' half, plus 19.89 per cent in the corresponding corridor down the right.

Big buzz about having fans back at Anfield on Sunday. Can’t wait. #YNWA pic.twitter.com/ho2FtPxAc9

Wolves at the door

For all the excitement about the return of fans to Anfield, the visiting team are not to be underestimated.

Wolves are enjoying their best start to a Premier League season, having gathered a healthy 17 points from 10 games so far.

Nuno has led his side to back-to-back seventh-placed finishes, and the gutsy win at Arsenal last week – when the team found focus despite losing Jimenez to injury early on – showed that they have ample spirit to accompany undeniable quality.