Jurgen Klopp's Liverpool have won the title with seven games remaining, but how does that compare with the earliest successes across Europe? 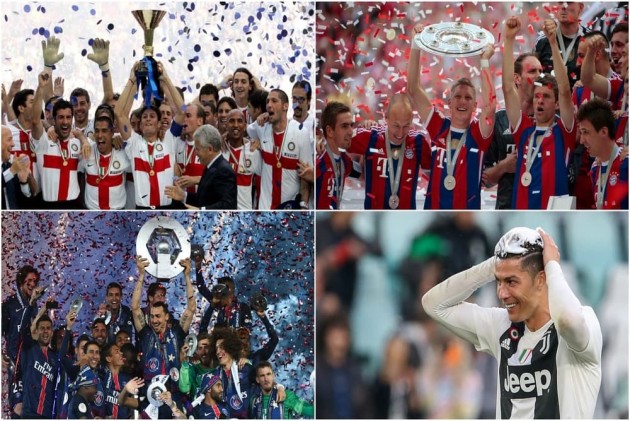 It has been a foregone conclusion for months but on Thursday, Liverpool won the Premier League title.

Jurgen Klopp's Reds are champions of England's top flight for the first time in three decades having waltzed to glory in 2019-20.

In wrapping up the title with seven games to play thanks to Manchester City's 2-1 loss to Chelsea on Thursday, Liverpool set a record for the earliest any club in England has won the top division.

But how does this compare with the records for Europe's top five leagues? We took a look.

Yet Liverpool, who finished fourth when City stormed to that title with 100 points, have obliterated the mark this term.

The Reds dropped just two points across their opening 27 fixtures and avoided defeat until the final day of February.

It should come as no surprise that PSG feature high on this list given their recent dominance of French football.

This was their fourth title win in a row and it was sealed 62 days before the end of the season on March 13 with a 9-0 thrashing of Troyes, the biggest away win in the history of the competition.

PSG finished a whopping 31 points clear of Lyon and Monaco and had a final goal difference of +83.

How do you follow a treble-winning season when you are a new coach in an unfamiliar league? By storming to the title in record fashion.

On the heels of Jupp Heynckes' all-conquering team of 2012-13, Bayern did not miss a beat domestically when former Barcelona boss Guardiola took over and on March 25, they were confirmed as Bundesliga champions for a 24th time.

It was Bayern's 52nd league game without defeat, though Guardiola's unbeaten side picked up just one point in their next three Bundesliga fixtures and exited the Champions League in the semi-finals.

80% - Birthday boy Pep #Guardiola won 80% of his games in the #Bundesliga - by far the best record of any manager in the competition's history. Eternal. pic.twitter.com/CuSZ0SoPBu

Juventus had the chance to own this record outright last season but a shock 2-1 defeat to SPAL - their second loss in five - saw them miss the opportunity.

The title-sealing win came on April 20 at home to Fiorentina - the last game Juve won that season - and it meant they shared the record with Roberto Mancini's Inter side.

With Juventus having been relegated prior to the season due to the Calciopoli scandal, there was no credible rival to Inter in 2006-07 and they lost only once, winning the league by 22 points.

8 - #Juventus have now won 8 Serie A championships in a row, setting a new record within the top-5 European Leagues – surpassing their own current run as well as Lyon’s between 2001/02 to 2007/08 (7 in a row). Infinity.#JuventusFiorentina #SerieA pic.twitter.com/DnDdK3jusA

There may have been a few title processions across Europe but Clasico rivals Madrid and Barca typically push each other close.

That was not always the case, though, with Alfredo Di Stefano and Ferenc Puskas instrumental in Madrid's dominant campaigns in the early 1960s.

Barcelona were a non-factor in either 'title race' then, but they capitalised on an off-campaign from Madrid in 1973-74, when Los Blancos finished down in eighth.