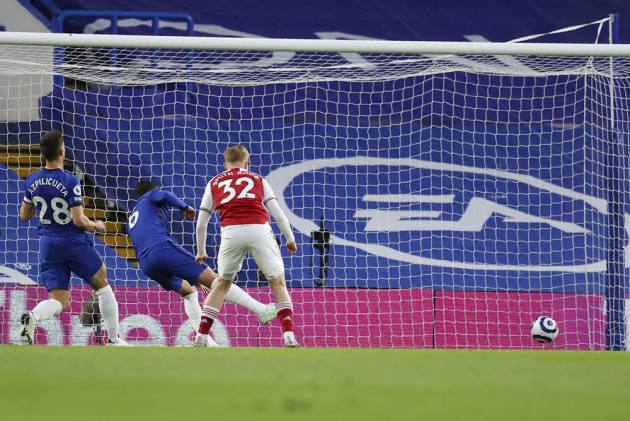 The midfielder's ill-conceived backpass caused havoc in the 16th minute, with Emile Smith Rowe the beneficiary, ensuring the Gunners doubled up on their 3-1 Boxing Day win over Chelsea.

Thomas Tuchel made seven changes to the side that beat Premier League champions and forthcoming Champions League final foes Manchester City last Saturday, seemingly with an eye on this weekend's FA Cup final against Leicester City.

Chelsea, who remain fourth having missed out on the chance to climb above their Wembley opponents, almost levelled when Kurt Zouma and Olivier Giroud both hit the crossbar in the final minute, as the battle for Champions League qualification took another twist.

Kai Havertz caught Pablo Mari napping and surged through on goal in the 10th minute, only to lift his shot wastefully over.

That mistake paled next to the wild backpass Jorginho sent fizzing towards his own net. A scampering Kepa Arrizabalaga did very well to push the ball off his goal line, but Pierre-Emerick Aubameyang got to the rebound quickest and set up Smith Rowe to finish.

Mason Mount led the Chelsea response, first having a shot blocked from Christian Pulisic's cutback before linking well with Havertz to draw a sharp stop from Bernd Leno.

Arsenal wing-back Bukayo Saka erred in trying to shepherd the ball out in the 36th minute, his England colleague Ben Chilwell drilling at Leno before Mohamed Elneny cleared behind with Mount lurking.

Tuchel made an attacking half-time substitution, with Callum Hudson-Odoi coming on for Billy Gilmour and Mount reverting to a deeper midfield role.

Chelsea remained on the front foot and thought they were level with an hour played, although Pulisic was offside when he converted Havertz's flick on from Mount's left-wing corner.

Elneny was tackled by Mount dangerously near to the Arsenal area, but Giroud – freshly on for Havertz against his former club – sliced wildly off target.

A stretching Pulisic shot too close to Leno with five minutes to play and the Arsenal goalkeeper touched Zouma's header onto his bar before Giroud went similarly close with the follow-up.

Liverpool play twice before Chelsea are next in league action, by which point they could be a point behind the Blues, while West Ham can also cut the gap. Next Tuesday's league encounter with Leicester could yet prove every bit as important to Chelsea as what lies in wait at the national stadium.

Chelsea were frustrated in their attempts to get back into the game, but it was not for the want of trying on Mount's part. The England youngster continued his stellar recent form and was at the heart of all of his team's best work. All three of Mount's goal attempts were on target and he created four further opportunities for team-mates.

Those were the best returns of any Chelsea player, as were his nine crosses attempted and four completed.

Jorginh-woe a gift to toothless Gunners

Arsenal created almost nothing of note, with Smith Rowe's goal one of only two shots on target. That made Jorginho's gaffe all the more galling and the Italy playmaker does not seem to play with the same authority when N'Golo Kante – rested here by Tuchel – is not alongside him. A chance deep into stoppage time bouncing off his shins for a goal kick summed up an outing to forget.

Chelsea will look to add a trophy to their phenomenal revival under Tuchel in Saturday's FA Cup final. Arsenal are next in action seven days from now at Crystal Palace.