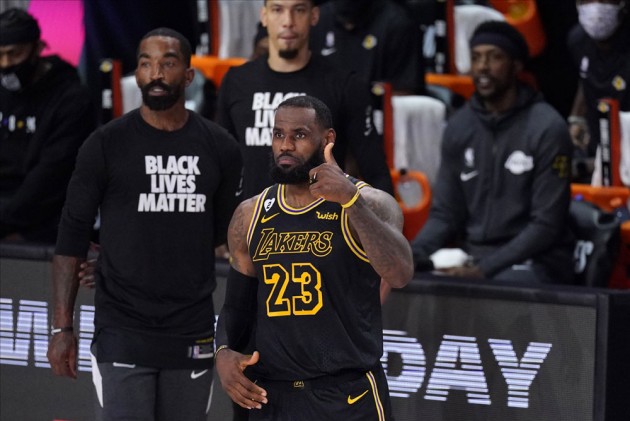 LeBron James and Anthony Davis were both named in the All-NBA First Team on Wednesday as the Los Angeles Lakers prepare to face the Denver Nuggets in the Western Conference Finals. (More Sports News)

The All-NBA selections were announced as the playoffs hot up in Orlando, although the Lakers duo were the only remaining members of the First Team.

James and Davis were joined by James Harden, whose Houston Rockets they beat in the second round, along with reigning MVP Giannis Antetokounmpo and Luka Doncic.

MVP candidates James and Antetokounmpo were both unanimous votes.

The Los Angeles Clippers' Kawhi Leonard and playoff nemesis Nikola Jokic headlined the Second Team. Jokic led the Nuggets past the Clippers on Tuesday to complete another remarkable series fightback.

Damian Lillard was also included after carrying the Portland Trail Blazers into the postseason, alongside veteran Chris Paul, who impressed following his trade from the Rockets to the Oklahoma City Thunder.

Pascal Siakam - disappointing in the playoffs for defending champions the Toronto Raptors - made up the selection.

Meanwhile, in the Third Team, the Boston Celtics' Jayson Tatum and the Miami Heat's Jimmy Butler are both still alive as Eastern Conference Finals opponents.

Russell Westbrook, part of the Paul trade, got recognition, too, and was joined by Rudy Gobert and Ben Simmons, the latter ending the season injured.