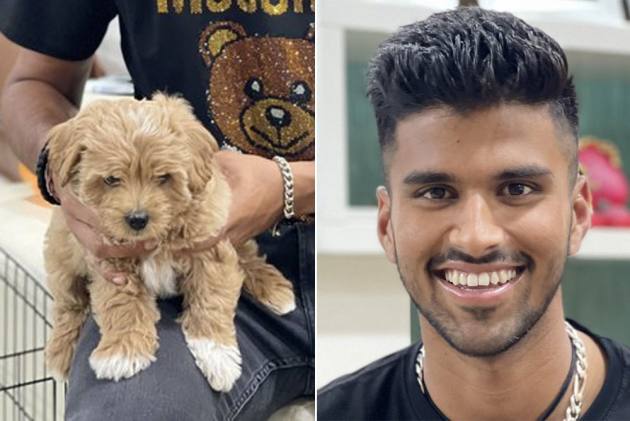 The 21-year-old, who made a dream Test debut at Brisbane's iconic venue against Australia in January, took to Twitter and shared a photo with a caption, which read: "Love is a four-legged word. World, meet Gabba!"

It became a viral post with many, including Australian fans, reacting to the naming of a pet after a venue in a rival country. But not many were impressed with it.

Australian here - I think it’s extremely cute that you named it Gabba. You’ve got every right to do that. It’s where you were a part of one of India’s greatest ever victories. My respect for you honestly has grown by a lot. Keep being you ðÂÂÂÂÂÂÂÂÂ

Exactly people seeing it as insult need to understand pets are family and its not an insult but a sweet memory of the place he made his debut on. Also people should stop looking down on animals n Pets

It's fun till u name ur dog with other country or city name..

When they name their dog with our country name then please be ready to smile at that time..

This is a very embarrassing thing you’ve done. How would you feel if an English or Australian player names their dog Wankhede or some other stadium?

Well that completely seems fine, and being open-minded their is nothing such wrong in it.
Even we have two nice and cute stadiums named as EDEN and EKANA, and both can be considered as good names for both humans and pets.ðÂÂÂÂÂÂÂÂÂ

Lovely!!! its surprising to see ppl criticizing this! whats wrong in naming it "Gabba"? A new addition to the family and he wants to name it with the venue which is special and close to his heart! Jhonty rhodes named his daughter "India" & that was nice too! love to baby "Gabba"

Sundar was one of the stars of India's triumphant Test tour Down Under. An injury-plagued India resorted dug into their reserves and beat the Aussies.

India lost the series opener at Adelaide, where they faced the ignominy of making a lowly total of 36/9. But fought back to win the second Test in Melbourne by a similar margin, an eight-wicket victory, even as skipper Virat Kohli returned home for the birth of his first baby.

A drawn Test followed in Sydney as the injury count in the touring party increases. But what followed in Brisbane was purely astounding. India fielded a motley group of greenhorns at a venue known as 'Fortress Gabba' for obvious reasons and came out with a historic victory.

And Sundar, who initially joined the team as a net bowler, played the balancing act with a matured performance with both bat and bowl.

Now, he already has three fifties with a high of 96 not out and six wickets in a fledging Test career of four matches.

He will turn up for Kohli-led Royal Challengers Bangalore (RCB) in the 2021 edition of Indian Premier League (IPL).