Lovlina Borgohain has assured India a boxing medal by entering the 69 kg semifinals. She wants to win gold, nothing less 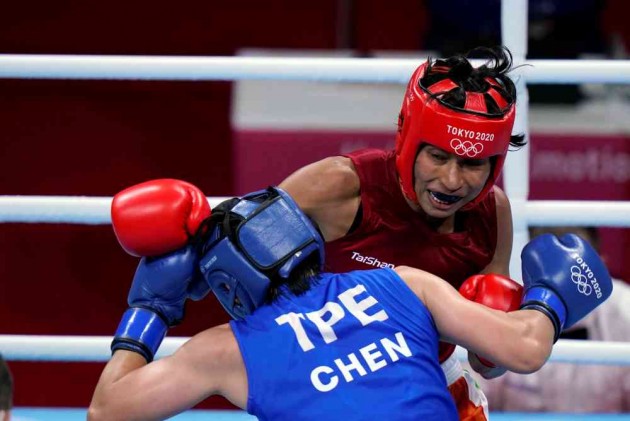 Lovlina Borgohain proved that she was level headed and not the one who will put the cart before the horse. Tokyo Olympics | Full Schedule | Sports News

Although the Boxing Federation of India arranged for a media reaction soon after Lovlina won her Tokyo Olympics 69kg quarterfinal match against the fancied Chen Nien-Chin of Chinese Taipei, the 23-year-old from Assam showed a matured head by politely refusing to 'celebrate' a medal guaranteed on her Olympics debut.

"I am not celebrating now...I don't want to stop at a bronze medal. Now I want the gold and will do whatever possible to get it," Lovlina said. The generally media-shy Lovlina Borgohain said she was "stress free" going into Friday's bout against the former world champion.

"I had lost four times to her. I knew her game and she knew mine. There was no strategy. I told myself I will take it as it comes and just back my game. Happy that it came of," said Lovlina, adding: "There was a bit of grudge for sure. Losing to someone four times does inject a bit of revenge element."

BFI's High-performance director Santiago Nieva said he was "nervous" after Simranjit Kaur lost earlier in the day but Lovlina turned the game against Chen "with a good second round."

Lovlina has showed tremendous staying power. Her 3-2 pre-quarterfinal win against Germany's Nadine Apetz was a tough one and Friday's clash with an opponent who was an overwhelming favourite was equally demanding.

"Look I was free in my mind. Probably that took the pressure off. Happy that I could handle the situation the way I wanted but it's still a long way to go," Lovlina said.

Lovlina is a Muhammad Ali fan. "Love his footwork and the way he throws his punches. No boxer is alike but I like his style and I have seen his videos before coming to Tokyo," said Lovlina.

Down with COVID, losing training time in Italy, paucity of sparring partners and international tournaments are some of the challenges Lovlina faced en route to Tokyo 2020. But she is two bouts away from a gold medal and Lovlina says, "I have a few points to prove."

Lovlina plays Turkey's Busenaz Surmeneli in the semifinals on August 4.