Deepak Punia pulled out of the World Wrestling Championship title clash in 86kg against Iranian great Hassan Yazdani due to an ankle injury sustained during the semifinal bout, thereby winning the silver medal 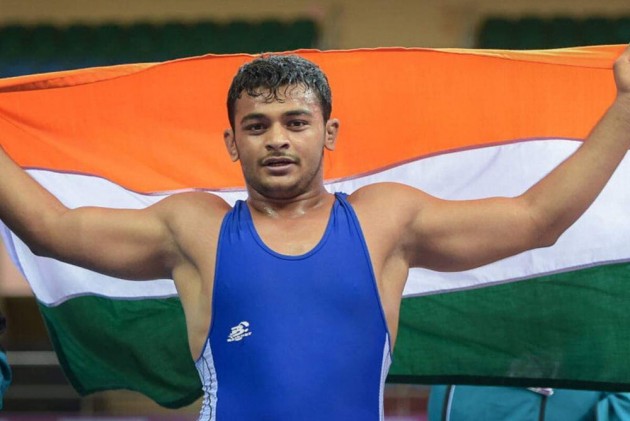 Wrestling was just a route which Deepak Punia hoped would find him a good job to help sustain his family.

He wanted a job and was even offered the post of a sepoy in the Indian Army back in 2016.

But he was told to dream big and not settle for little things in life by none other than Sushil Kumar.

"Keep wrestling as your priority, jobs will chase you later," Sushil, India's most successful wrestler with two Olympic medals and a world title, had told him, besides arranging for a sponsorship.

Deepak listened to the advice of his senior wrestler at the Chhatrasal Stadium in Delhi and within three years bagged the big titles on offer in age groups.

He became a World Cadet champion in 2016 and only last month won the junior World title, only the fourth Indian ever to do so and first in 18 years.

Within one month of that feat in Estonia, he found himself face-to-face with his idol and Iranian great Hasan Yazdani for a clash, the winner of which would be crowned the senior world champion.

It is a pity that the bout did not happen because of the ankle injury he sustained during the semifinal against Switzerland's Stefan Reichmuth and he settled for a silver.

He missed out on a great opportunity to wrestle with one of the best the sport has seen in its history.

But the last three years in Deepak Punia's life still sounds like a dream.

So, what is it that makes Deepak India's best in heavyweight category in recent times. The results have come thick and fast.

"It's a combination of a lot of things. Everything has to come together," said India's former foreign coach Vladimir Mestvirishvili, who has played a key role in Deepak's progress as a world-class grappler.

"You need four things -- brain, power, luck and flexibility on the mat. Deepak has all. He is a disciplined wrestler and that he gets from his father.

"Boys usually get bored with the repetition process when they are told to learn a new technique but Deepak would do it for two, three, four days unless he gets it. It comes from family."

His father Subash has been coming to his training centre every morning to deliver milk and fruits to him since 2015 despite the fact their Chhara village in Jhajjar district in Haryana is at a distance of 60km.

That Deepak has immense appetite for milk was known from his childhood when he was a four-year-old kid and even it has a role in him getting the moniker 'Ketli pehalwan'.

The Sarpanch of his village once offered him milk which was kept in a 'ketli' (kettle). He drank that in one gulp. He was offered a second, a third and a fourth and he finished all.

From then onwards, people started calling him 'ketli pehalwan'.

Deepak said staying disciplined has been a big reason for his success.

"I like hanging out with friends, going to malls and doing some shopping. But we are not allowed to go out of the training centre. I like buying shoes, shirts and jeans, though I don't get to wear them because I am always in a tracksuit," he said.

"Whenever I get a chance, like after the tournaments, I go out and eat even junk food. But once the break is over, I don't think about anything else. Wrestling and training is life then."

The sponsorship he got from OGQ took away a bit of worry and he began to concentrate on honing his skills.

"I was desperate to get good results so that I can get a job somewhere to help my parents. My father used to sell milk. He worked really hard. I wanted to contribute in some way."

Success on the mat resulted in bettering his family's financial conditions.

He got a job as Naik Subedar in 2018 in the Indian Army and by that time he had learnt how to make money out of wrestling.

Deepak would go to competitions dubbed as 'mat dangals' and earned some handsome money. He competed in several of them and forced his father to stop selling milk. He even bought an SUV last year.

"I don't know how much money I have earned. I never made an account of that. But it was decent money. It's been sometime now that I have competed in 'mat dangals' but I did I earn some money and spent all," he laughed.