Bangladesh skipper Mahmudullah said his team was excited at the prospect of clinching its maiden T20 series against India in Rajkot. Bangladesh registered their first-ever T20 win over their neighbours in Delhi last week. 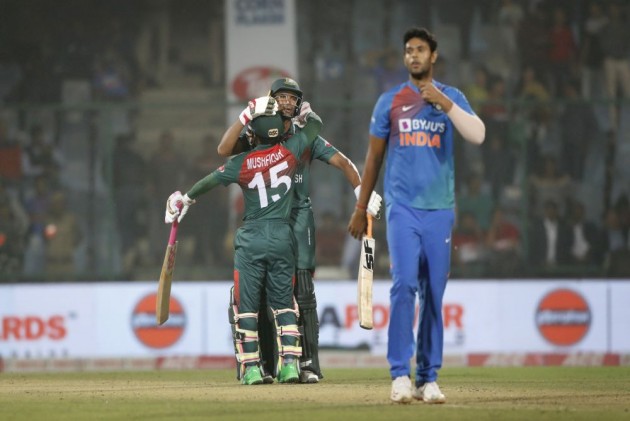 Bangladesh captain Mahmudullah on Wednesday (November 6) said a T20 series win against hosts India will be a "big boost" for Bangladesh cricket in the wake of recent setbacks, including the ban on star player Shakib Al Hasan.

"And hopefully as I have mentioned, we have to play good cricket to beat India because we know that they are a good side at home and across the world, so we have to on our top from the first ball," he said.

Ahead of the India tour, Bangladesh’s star-all-rounder Shakib was banned for two year, one year of it suspended, for failing to report approaches by suspected Indian bookie Deepak Aggarwal to the ICC’s Anti-Corruption Unit.

Before this, the Bangladesh players had gone on a strike demanding better pay before their board agreed to most of their demands.

Mahmudullah thinks this is Bangladesh’s best chance to win a T20 series against India.

"Obviously, I think, it is a great-great opportunity especially when you have already won the first game in the series, so it’s a great opportunity and I think boys are feeling energetic about it and hopefully we can put up a good show,” he added.

He said winning against India in India would be a big achievement.

"What I said earlier, since we won the first match, it will give us an extra confidence for all of us. We are not sitting idle, we are all desperately waiting for Thursday’s match. Everybody is working hard and giving their best effort in practice.

"I feel that in T20s, if you can assess the wicket properly and the length and accordingly place your field, then you have a chance to do well. T20 is such that it’s important to make the right decision at the right time and if you think about it, you may have a game plan but you have to change it and so adaptability is crucial."

According to the skipper, "India is a very strong side at home and they have proven it in the last 11-12 years how strong they are. It will be a big achievement if we can win."

India have an inexperienced bowling line-up in the series as their key pacers Bhuvaneshwar Kumar and Jasprit Bumrah are missing from the action due to injury. But the opposition skipper thinks otherwise.

"If you consider their bowling attack has been very versatile, they have good spinners as well as first bowlers (pacers) and they have a very good bowling side (lineup) as well in this T20 tournament but having said that as I mentioned, we have to right on the top from the first ball so that we can take that momentum in our side and take forward the game."

While saying that a 170 plus would be a par score, the skipper said the final eleven would be finalized only after seeing the conditions.

"By seeing the track record here, it will be a good wicket to bat on, hopefully we can get 170 plus, but we need to assess the wicket before we get into the game," he noted.

The skipper also praised youngsters like Afif Hossain, Naim Shaikh saying "they have proved that they have the capability to do well and they deserve their places and hopefully they will continue in the same way they have started."