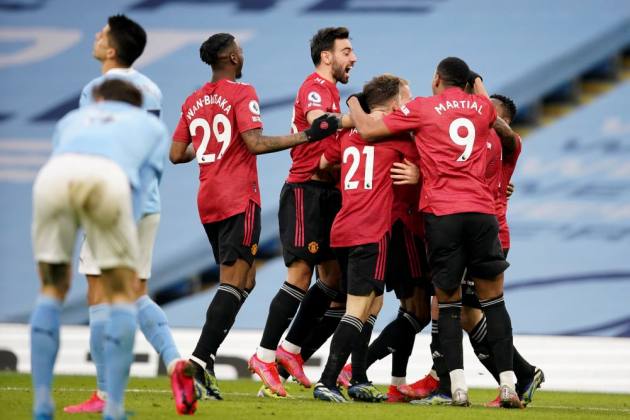 Bruno Fernandes converted a penalty after 101 seconds following a clumsy foul by Gabriel Jesus, while Luke Shaw was the unlikely scorer as the visitors doubled their lead in the 50th minute.

The result means Ole Gunnar Solskjaer has once again come out on top against Pep Guardiola, in the process becoming the first United boss to win each of his first three away trips in all competitions at the Etihad Stadium.

City may still hold an 11-point cushion at the summit but missing out on setting a new club record of 29 games unbeaten will sting, particularly considering the opposition. This is their first setback since a 2-0 reverse at Tottenham on November 21, 2020.

92 – Bruno Fernandes’ penalty was the 92nd taken in the @premierleague this season, equalling the same number from the entirety of last season. Interpretation. pic.twitter.com/k9jYbWbE1H

United had not scored in their three previous outings leading into the contest, yet were gifted the chance to end that barren run when Jesus – retained in the Guardiola's starting XI following a brace in the 4-1 win over Wolves – carelessly clipped Anthony Martial.

The Brazilian was nearly bailed out by compatriot Ederson, yet the goalkeeper was only able to palm Fernandes' low effort from the spot into the net.

Initially flustered at falling behind for the first time in 20 league games, City eventually recovered from the early setback to assume control of proceedings.

Oleksandr Zinchenko tested Dean Henderson – again playing with David de Gea away on paternity leave – while Rodri struck the angle joining crossbar and post with a rising drive early in the second half.

However, it was United who grabbed the pivotal second goal in the game. Shaw carried the ball from deep and then continued his forward run after giving possession to Marcus Rashford, allowing the left-back to take the return pass and drag a low shot through Rodri's legs and into the far corner.

City huffed and puffed but were unable to find a way to blow the United defence down, not aided by managing to put just five of their 21 attempts on target. While seemingly destined to finish the campaign on top of the table, they were second best to their rivals here.

What does it mean? Jekyll and Hyde once again from Red Devils

Solsksjaer has a long-overdue first win over a 'big six' rival this season, United continuing to be specialists on the road under the Norwegian - they are now 22 unbeaten away in the league.

What made this result so impressive is United had looked tired and toothless in the 0-0 draw at Crystal Palace on Wednesday. They were anything but in this game, however, defending resolutely yet always carrying a threat on the counter. The deserved victory sees them leapfrog Leicester City to reclaim second place in the table.

While unable to add another derby goal to his tally, having scored at City in the previous two seasons, Martial caused plenty of problems for the hosts before making way late on.

The French forward started through the middle in the absence of Edinson Cavani and was a central figure in the crucial early penalty. He completed 95 per cent of his attempted passes and put two of his three attempts on target.

Jesus fails to save City

It was a painful outing for Jesus, in more ways than one. His desire to help out after losing possession at a throw-in led to a careless foul as Martial appeared set to be crowded out, while he then collided with a post at the other end when trying to turn in an off-target shot from Riyad Mahrez before half-time.

Despite his side trailing, Guardiola replaced the forward off with 20 minutes remaining, though the City boss surprisingly opted not to utilise Sergio Aguero from the bench.

City are at home again on Wednesday, Southampton the visitors. United have a midweek fixture too, hosting Milan in the first leg of their Europa League last-16 tie on Thursday. Their next league outing is in a week, when former boss David Moyes brings West Ham to Old Trafford.