After taking one point from games against Leicester and Leeds, Manchester City needed a win against Arsenal and Raheem Sterling delivered 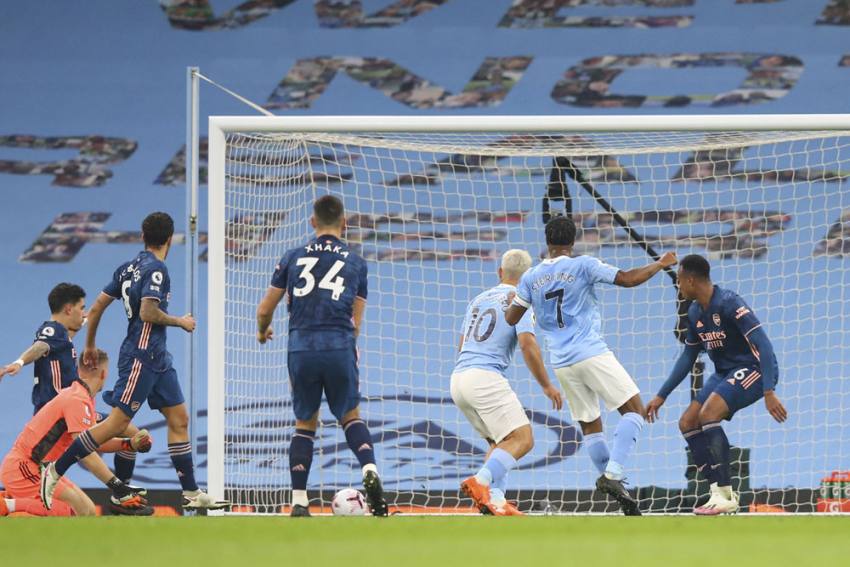 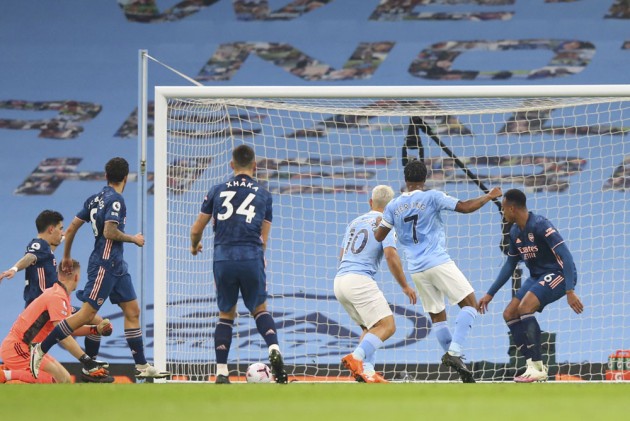 Raheem Sterling's fourth goal in his past three games got Manchester City back to winning ways in the Premier League with a 1-0 victory over Arsenal. (More Football News)

Sterling sat out England's games against Wales, Belgium and Denmark with a hamstring niggle but was back in action to score decisively midway through the first half at the Etihad Stadium.

But Guardiola's side held on for a timely triumph after taking a solitary point from encounters with Leicester City and Leeds United before the international break.

Riyad Mahrez, stationed on the right of a fluid City attack, was prominently involved in the opening exchanges - firing wide inside the opening minute before digging out a cross for the returning Sergio Aguero to head over.

The former Leicester City favourite's astute in-field pass released Aguero to run at the Arsenal defence in the 23rd minute, with Phil Foden's resulting shot saved by Bernd Leno and tucked home on the rebound by Sterling.

Who else but @sterling7?

Bukayo Saka danced through the City backline to force a stop from Ederson as Arsenal sought a swift response, although Leno had to be alert to thwart Mahrez at his near post before the half hour and denied Foden after his defence played into trouble.

It was a game to busy both goalkeepers, with Ederson springing into action when Saka and then Pierre-Emerick Aubameyang burst into the City box.

Guardiola sent on Ilkay Gundogan, returning after a positive coronavirus test, in place of Aguero in an attempt to shore up midfield with Arsenal in the ascendancy after the break.

Nevertheless, free-kicks from David Luiz and Nicolas Pepe that did not trouble Ederson were the closest they came.

On an increasingly rare foray forward, City wing-back Joao Cancelo almost forced David Luiz to prod into his own net. In the end, Sterling's solitary strike would prove enough.

What does it mean? Shape-shifting Pep gets City back on track

Without his best centre-back and midfielder in Aymeric Laporte and Kevin De Bruyne, Guardiola had to seek creative solutions within a hybrid 3-4-3.

Kyle Walker, on the right of the back three, gave such close attention to Aubameyang before half-time that Arsenal's star forward was moved in-field from his usual berth on the left.

A dazzling array of attacking angles were created in the period either side of Sterling's goal, although the bookings accrued with varying degrees of desperation by Cancelo, Rodri, Nathan Ake and Ruben Dias showed City also had to get their hands dirty.

The emergence of Foden and the close-season arrival of Ferran Torres to compete with Mahrez suggests Bernardo Silva's best route back to a regular starting berth might be in the centre of midfield at City.

He was superb in that position on Saturday, combining a slick manipulation of the play with a relentless work rate. The Portugal playmaker completed 90.2 per cent of his 51 passes in the Arsenal half and contested 14 duels as he covered 12.16 kilometres - more than any other City player.

Bellerin blunders at the wrong moment

No Arsenal player made more than Hector Bellerin's five tackles but the one he missed proved decisive, meekly showing Foden inside to shoot in the build-up to Sterling's winner.

City host Porto in their Champions League opener on Wednesday, with Arsenal travelling to face Rapid Vienna in the Europa League a day later.