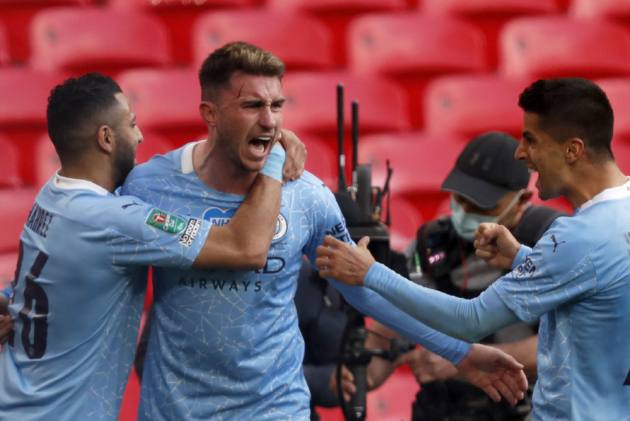 Aymeric Laporte headed Manchester City to a 1-0 win over Tottenham in the EFL Cup final as Pep Guardiola's men landed their first trophy of what could be a treble-winning season. (More Football News)

City's attacking players rained attempts on the Tottenham goal in a one-sided Wembley clash, but it was defender Laporte who came up with the clinical finish in the 82nd minute, nodding Kevin De Bruyne's free-kick past Hugo Lloris.

The Spurs goalkeeper had been magnificent until then, but the quality of the delivery and the precision of Laporte's header gave the French goalkeeper little chance.

Top of the Premier League and chasing Champions League glory, a fourth consecutive triumph in the EFL Cup seems unlikely to be the pinnacle of City's achievements this term.

Tottenham, seeking a first major trophy since they won this competition 13 years ago, were predictably second best for long periods. At the end of a week in which Jose Mourinho was sacked by Spurs, and both finalists entered and then pulled out of the European Super League, this was a final that showed City are out on their own as England's premier team.

They threatened in the seventh minute when Phil Foden prodded wide from Raheem Sterling's pacy low centre, and moments later Sterling put a header off target.

Sterling had an even better chance in the 14th minute when Foden's cut-back from the left reached him near the edge of the six-yard box, but the City man smashed his shot against the sprawling Eric Dier.

Watched by an 8,000-strong crowd at Wembley, a stadium that has welcomed more than 10 times that number through its doors in normal times, City looked at ease against a Tottenham side who had Harry Kane back from injury.

Foden looked a certain scorer in the 26th minute when he met a cross from De Bruyne on the right. It looked to be Foden against Lloris, but into the equation came Toby Alderweireld who flung himself at the winger's shot and made an exceptional block, deflecting the ball against the outside of the right post.

Sterling chipped wide, Riyad Mahrez whipped a 25-yard effort a whisker away from the top left corner, and Lloris saved well from Joao Cancelo. Tottenham, somehow, were still on level terms at the break.

Giovani Lo Celso almost put Spurs ahead right at the start of the second half, an arcing shot from the playmaker brilliantly touched away by Zack Steffen.

Yet City chances kept coming, with Mahrez, Cancelo and Ilkay Gundogan all threatening. When Tottenham, spurred by a lung-busting run from Kane, got forward, Pierre-Emile Hojbjerg haplessly kicked the ball out of play, anticipating a run from Sergio Reguilon that never came.

Fernandinho and Mahrez were denied by the busy Lloris, and Gundogan volleyed wide.

Tottenham caretaker boss Ryan Mason would have been dreaming of glory, until along came Laporte.

City had a second goal disallowed in stoppage time, with Foden offside before he teed up Mahrez. It only took one, and now City go to Paris, turning their focus from beating domestic rivals to conquering Europe.

- Manchester City secured their eighth League Cup title, the joint-most alongside Liverpool. Indeed, they are just the second team to win the competition in four consecutive campaigns (Liverpool, 1981-1984).

- Only Arsenal (6) have lost more League Cup finals than Tottenham (5), with Spurs now losing each of their last three finals in the competition.

- Since the turn of the century, Tottenham have ended as runners-up in five of their six finals across all competitions, failing to score in each of their last four finals.

- City have won 19 of their 25 League Cup matches under Pep Guardiola (D4 L2); with only Roy Evans (78.3 per cent) posting a higher win percentage amongst managers in League Cup history than the Spaniard (76 per cent).

- Tottenham only attempted two shots, accumulating an expected goals total of 0.06, while in contrast City fired in 21 shots and posted an xG of 3.63.

- Guardiola became the first manager to win the League Cup in four consecutive seasons, while no manager has lifted the trophy more times than he has (4 – level with Brian Clough, Alex Ferguson and Jose Mourinho).