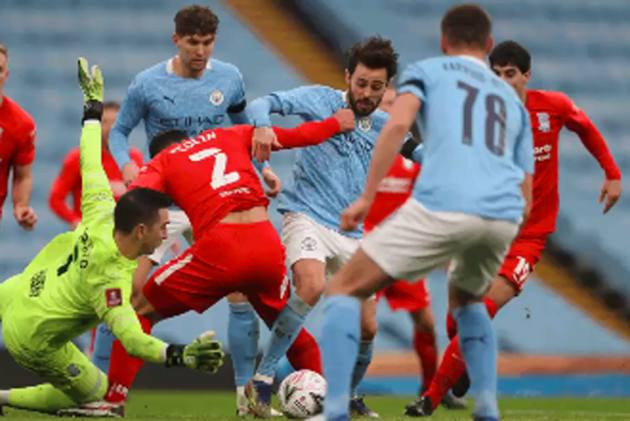 Manchester City eased into the fourth round of the FA Cup thanks to a Bernardo Silva-inspired 3-0 win at home to Birmingham City on Sunday. (More Football News)

Pep Guardiola made the somewhat surprising decision to name what was essentially his strongest possible XI, and their superior quality was telling from the start as they quickly raced into a 2-0 lead.

Silva opened the scoring with a gorgeous volley and swiftly doubled City's advantage to cap off a fine move in the 15th minute, before Phil Foden effectively killed off any hopes of a Birmingham comeback before the interval.

City were less deadly in the second period as they failed to add to their lead, but it mattered little as they had no difficulty seeing out a comfortable victory.

Aitor Karanka and Birmingham will have been braced for a difficult day after seeing the line-up chosen by Guardiola, though nothing could have prepared them for the hosts' start.

Silva displayed remarkable technique to make it 1-0 as he unleashed a stunning volley just inside the box to punish a poor clearance, picking out the top-left corner.

He soon got a second with a simple close-range finish, guiding home Kevin De Bruyne's cutback after the Belgian had been well spotted by Riyad Mahrez.

City found their stride again after something of a lull, and Foden increased the lead just past the half-hour mark, rifling into the bottom-right corner from 20 yards after being picked out by Mahrez.

12 - Phil Foden has been directly involved in 12 goals in all competitions this season (7 goals & 5 assists), the most of any U21 player for Premier League sides. Star. pic.twitter.com/sBwf296lAd

City remained dominant and thought they had a fourth goal just past the hour, only for VAR to confirm Mahrez had strayed offside when latching on to Foden's pass.

Silva passed up the chance to complete his hat-trick as he dragged wide when the ball fell kindly for him, and that proved to be his final opportunity as City settled for a three-goal victory.

What does it mean? City emphatic but Guardiola learns little

It is fair to say, Guardiola may have surprised a few by naming such a strong starting XI and it seemingly yielded the desired result as City went into half-time 3-0 to the good.

Nevertheless, Guardiola will have learnt very little about that first-half performance given his line-up was full of first-team regulars and they were facing a side struggling in a Championship relegation battle.

A few of the kids were sent on in the second half and did their chances of further opportunities no harm, though the game had become little more than a training exercise by that point.

There were several City stars who produced classy displays, but Foden was arguably the most enjoyable to watch. His goal was a great strike, while he had already threatened beforehand with his other two shots. The England international also made three key passes – one of those was particularly clever, as he chested down a long ball to tee up Silva for an effort that hit the side-netting.

City's Brazilian striker was by no means poor here – with three shots and a couple of key passes, he was actually quite bright. But he will likely be frustrated by the fact he could not get his name on the scoreboard, particularly given one of his first-half opportunities was a one-one-one situation that he spurned.

It is back to Premier League action on Wednesday for City, who host Brighton and Hove Albion. Birmingham continue their quest to get clear of the Championship's relegation zone three days later when they go to coach Karanka's former team Middlesbrough.