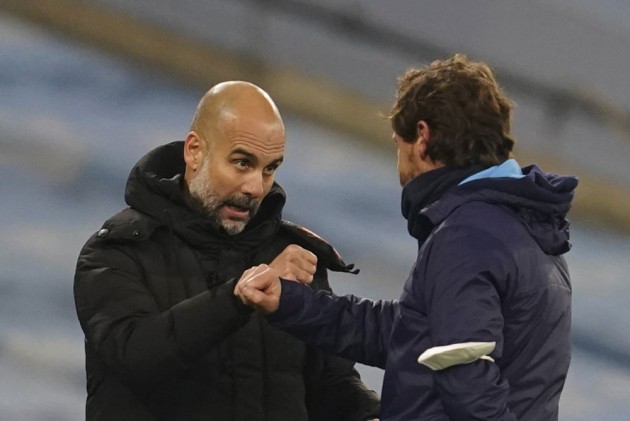 Sergio Aguero returned to action with a goal as Manchester City closed out their triumphant Champions League group campaign with a routine 3-0 win over Marseille. (More Football News)

Ferran Torres brought the game to life after a goalless first half, continuing an impressive vein of form in Europe's top competition with a smart 48th-minute finish.

Aguero, who has struggled with the after-effects of meniscus surgery over the early months of the season, came off the bench to seal the points 13 minutes from time, offering Pep Guardiola a timely reminder of his qualities ahead of Sunday's Manchester derby at Old Trafford.

Another substitute, Raheem Sterling, completed the scoring for City, who were already through as group winners and can now boast their best-ever Champions League haul of 16 points.

Marseille bow out of continental competition in 2020-21 after five defeats from six outings.

Ilkay Gundogan delivered a wonderful out-swinging free-kick from the right in the 13th minute and Aymeric Laporte should probably have done better than heading over under pressure from Alvaro.

Marseille grew into the contest and, shortly after Eric Garcia's knee injury forced City into a defensive change, Dimitri Payet had a deft finish with the outside of his right foot ruled out for a clear offside.

Silva drove forward after picking up Stones' pass to play in Mahrez, who laid on Torres for a composed close-range conversion.

Foden twice went close before the hour - scuffing wide on the end of a move he started before shooting too close to Steve Mandanda, who kept out a stinging 65th-minute drive from Kyle Walker.

Torres was unable to convert the rebound on that occasion but Mandanda must have know what was to follow when he parried Ake's firm header from Foden's corner and saw the arch poacher Aguero lurking.

It was Sterling's turn to smuggle the ball home in the final minute when the unfortunate Mandanda could only push Torres' cross onto Alvaro.

What does it mean? Guardiola to go back to the future in Manchester derby

During a forgettable first half, City lined up in a now-familiar 4-2-3-1 and, not for the first-time this season, provided limited goalscoring threat. The half-time rejig, stationing Fernandinho as a lone holder behind energetic and creative runners from midfield, gave the hosts far more teeth. Plenty has changed since Guardiola's tried and trusted 4-3-3 helped City to accrue 198 points across two title-winning seasons and the manager's concerns over vulnerabilities to the counter-attack are valid, especially when considering the threat United will pose.

But when he took the handbreak off - albeit in an admittedly meaningless match - it was easy to wonder whether attack remains the best form of defence for a team now on a run of five consecutive clean sheets.

Torres continues to grow in stature

A close-season signing from Valencia, Torres can reflect on a fine adaptation to his new surroundings. He has only started five of City's 10 Premier League games to date but made it four goals in five Champions League appearances. A winger by trade, the 20-year-old again impressed in a central attacking role. Throw in his Nations League hat-trick in Spain's 6-0 rout of Germany last month and you have an impressive body of work.

There is surely no player in Guardiola's squad who would revel more in a winning goal in front of the Stretford End than boyhood City fan Foden. The England playmaker did okay here, attempting five shots and creating two chances, but probably did not do enough to force his manager's hand for the weekend.

- Manchester City have progressed as group winners in each of their last four UEFA Champions League campaigns, amassing 16 points in 2020-21 – the joint-most among English sides in a single group stage in the competition (along with Arsenal in 2005-06, Man Utd in 2007-08 and Tottenham in 2017-18).

- Marseille have lost eight consecutive UEFA champions League away games for the first time – a run that stretches back to 2012.

- Ferran Torres has scored four goals in five UEFA Champions League games for Man City, twice as many as he netted for Valencia in the competition (two goals in nine appearances).

- Man City’s Ederson is the first goalkeeper to keep five or more clean sheets in the UEFA Champions League group stages for an English team sine Pepe Reina for Liverpool in 2005-06.

City make the short trip to face Manchester United on Sunday, needing a win to leapfrog their neighbours in the Premier League table, while Marseille will target a sixth consecutive Ligue 1 victory when they host Monaco.