Manchester City made eight changes from their 3-0 win over Arsenal but Pep Guardiola's men were in uncompromising mood against Burnley. 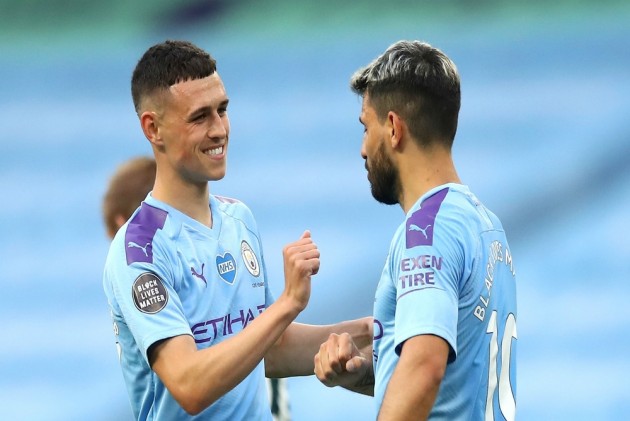 Phil Foden and Riyad Mahrez helped themselves to two goals apiece as Manchester City ran up a 5-0 Premier League win over Burnley.

Sean Dyche only being able to name seven substitutes – including two goalkeepers – suggested his team were ill-equipped for the task at hand, and so it proved.

There was little doubt over the outcome from the moment Foden produced a sweetly struck 22nd-minute opener.

Mahrez and David Silva scored beautifully constructed goals either side of the former slotting home a penalty in first-half stoppage time.

Foden, who also completed the scoring in last Wednesday's 3-0 victory over Arsenal, was on target again in the 63rd minute and City's win means Liverpool's title wait will go on a little longer.

Jurgen Klopp's men cannot mathematically be confirmed as champions when they host Crystal Palace this week, with their mammoth lead trimmed to 20 points.

City initially lacked tempo and struggled to get in behind a deep-lying Burnley defence, something Foden took out of the equation by arrowing a stunning 25-yard strike into the bottom-right corner.

A glorious raking pass from Fernandinho was met with a deft first touch from Mahrez that allowed him to torment Charlie Taylor before firing home across Nick Pope right footed.

The Burnley goalkeeper guessed correctly but could not prevent the Algeria international from making it 3-0 from the spot, after a VAR review showed Ben Mee was fractionally late into his challenge on Sergio Aguero.

Aguero hobbled out of the action as a result of that incident but it did nothing to check City's momentum, with Foden once again instrumental in the 51st minute – releasing Bernardo Silva with a delicious reverse pass. David Silva was the beneficiary among those queueing up to score.

4 - Bernardo Silva has assisted four of Man City's eight Premier League goals against Burnley this season. The last player to provide as many assists against a side in a single campaign was Christian Eriksen v Stoke in 2016/17 (4). Gifts. pic.twitter.com/D5hkUXOVwi

Kevin De Bruyne's introduction in place of Mahrez with an hour played was a sorry sight for the beleaguered visitors and the Belgium star scythed through midfield in his typical manner, feeding Bernardo Silva whose low cross was touched towards Foden by Gabriel Jesus for another fine finish.

During the match, Burnley issued a statement to strongly condemn those responsible for a plane flown over the Etihad Stadium carrying a banner that read "White Lives Matter Burnley".

What does it mean? Life after Sane for City

Pep Guardiola's confirmation that Bayern Munich-bound Leroy Sane - a late substitute for Foden - will not sign a new contract at the club made headlines on Friday and his suggestion he might not seek a replacement for the Germany winger raised eyebrows among some of the City faithful. The men in possession certainly made their case, with Foden deployed in the left-wing berth where Sane excelled and Mahrez locating the devastating Leicester City form he has only shown sparingly since moving to Manchester.

Such is Foden's status, as a homegrown talent and a boyhood fan of a club where the route from the academy to the first team has been largely blocked over the past decade, considerable scrutiny awaits his every appearance. The fact he thrives under this microscope suggests a temperament to match his talent. Across 12 starts in all competitions this term, the England Under-21 playmaker has four goals and seven assists.

Burnley rarely looked like a side heading into this match on a seven-match unbeaten run in the Premier League. The coronavirus hiatus obviously robbed them of that momentum but Dyche certainly deserved better than having a chunk of first-team regulars unavailable due to contract brinkmanship. He made his displeasure with the situation fairly clear before kick-off and a third consecutive 5-0 thrashing on this ground will have done little for his mood. The Burnley board must act judiciously to patch up relations with a man who is unquestionably their most valuable asset.

- City have scored five or more goals on 17 different occasions in the Premier League since Pep Guardiola joined at the start of the 2016-17 campaign; eight more than any other side.
- Burnley suffered their joint-highest margin of defeat in a Premier League game, only conceding more goals once before in the competition (6-1 versus City in April 2010).
- Burnley are the first side to have as many as 10 English starters in a Premier League game since Middlesbrough in May 2006 (10 against Fulham).
- Bernardo Silva has assisted four of Manchester City's nine Premier League goals against Burnley this season. The last player to provide as many assists against a side in a single campaign was Christian Eriksen against Stoke City in 2016-17 (four).

City are on the road at Chelsea on Thursday, when Burnley host Watford.