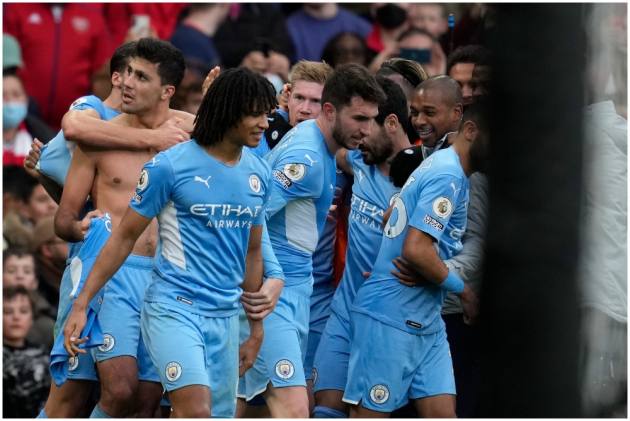 City’s comeback to win 2-1 and secure an 11th straight Premier League 2021-22 victory was completed in the third minute of stoppage time, prompting Rodri to rip off his jersey and slide across the field right in front of the home Arsenal support.

As City moved 11 points in front of Chelsea at the top of the standings, fourth-place Arsenal was left dwelling on its collapse. City had been trailing through Bukayo Saka’s goal during an electrifying first-half display from Arsenal.

But the game shifted in City’s favour during a two-minute spell after the break. Granit Xhaka conceded a penalty for bringing down Bernardo Silva with a trailing leg and Riyad Mahrez leveled from the spot in the 57th minute.

What proved as costly for Arsenal was Gabriel getting booked for trying to scuff the penalty spot before Mahrez’s kick. Within a minute, Arsenal did have an immediate chance to regain the lead.

But Nathan Ake’s hooked, scrambling goal-line clearance prevented an own goal from Aymeric Laporte after he headed over goalkeeper Ederson. Arsenal’s attempts to cling on to the point were thwarted by Laporte’s deflected shot reaching Rodri to score.

“We are very frustrated with the outcome if you play a game like this against one of the best teams in the world,” said Arsenal assistant manager Albert Stuivenberg, who was on the touchline while manager Mikel Arteta isolates with COVID-19.

“At the end to have zero points is frustrating because we should have won the game.” Arsenal was frustrated in the first half not to be awarded a penalty before Saka struck with a first-time connection from Kieran Tierney’s well-placed pass, City goalkeeper Ederson having escaped action for bringing down Martin Odegaard.

“I am looking for consistency,” Stuivenberg said. “We have VAR in place so why not check yourself as a referee? That did not happen so it is disappointing.”