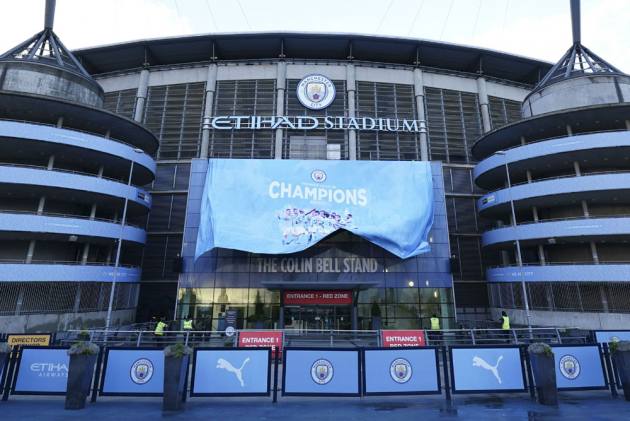 Luke Thomas volleyed Leicester into a 10th-minute lead against a much-changed United side and, though Mason Greenwood responded five minutes later, the Foxes ensured the title will head to the blue half of Manchester through Caglar Soyuncu's 66th-minute header.

City were unable to get over the line on their own terms last weekend as a much-changed XI went down 2-1 to Chelsea, despite Raheem Sterling giving them a 44th-minute lead

Sergio Aguero, who has twice scored in title-clinching victories for the club where he is the all-time record goalscorer, could have given them breathing space in first-half stoppage time but botched a Panenka penalty attempt in hilarious fashion.

That left the door ajar for Thomas Tuchel's men to capitalise through Hakim Ziyech's equaliser and Marcos Alonso's stoppage-time winner.

Aguero can at least console himself with a fifth league winners' medal, having been involved in each of City's Premier League wins.

7 - In all, this is Manchester City’s seventh top-flight title, also winning it in 1936-37 and 1967-68 before the Premier League was formed. That takes them level with Aston Villa and behind only Man Utd, Liverpool, Arsenal and Everton in the all-time rankings. Existence. pic.twitter.com/dRwD73eTJb

It pulls them level with Chelsea on five triumphs, with Manchester United's 13 won under Alex Ferguson still granting them breathing space overall.

Guardiola joins Arsene Wenger and Jose Mourinho on three Premier League titles. Only Ferguson has won more and the Catalan is the 12th manager in English top-flight history to have won three or more league championships.

In the modern era, there can be no doubting City's dominance, with this their fifth title in the past 10 seasons. Only Chelsea (two) have won the Premier League more than once during the same period.

Guardiola similarly stands tall among his contemporaries, with nine titles across his 12 top-flight seasons as a coach – three apiece with Barcelona, Bayern Munich and City.

Such an achievement did not look likely as his team made a stuttering start to 2020-21. On Christmas Day they were eighth in the table and eight points behind leaders Liverpool.

Only two teams in Premier League history (Arsenal in 1997-98 – 13 points; Manchester United in 1995-96 – 10 points) have been further behind at Christmas and won the title and neither were as low as eighth when they did so.

You have to go back to before the Premier League era for a team in a lower position on December 25 ending up as champions. City themselves were 12th in 1936, the same position as Liverpool in 1981. Derby County claimed glory from 10th at Christmas in 1974-75.