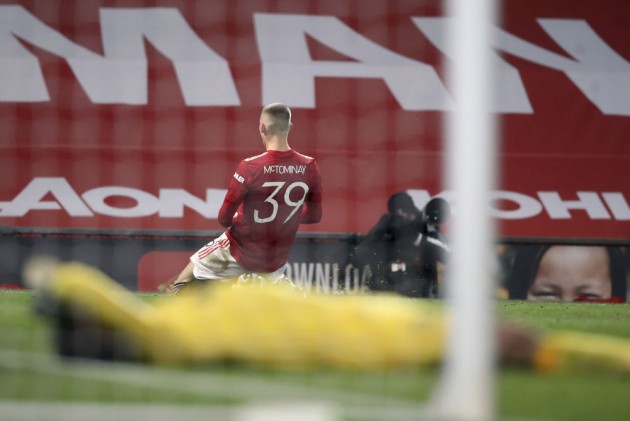 Manchester United eventually saw off West Ham 1-0 after extra-time to reach the quarter-finals of the FA Cup, substitute Scott McTominay getting the winner at Old Trafford on Tuesday. (More Football News)

Ole Gunnar Solskjaer took the opportunity to give a few United fringe players opportunities to impress but ultimately had to turn to his regulars on the bench, with McTominay the one to make the difference.

United were frustrated in the first half as they struggled to make the most of their dominance over a West Ham side who offered very little in attack, with Victor Lindelof going closest for the hosts when denied by the upright.

Aside from United managing fewer shots, the pattern of the match hardly deviated after the break and it was no surprise to see it remain goalless at the end of the regulation 90 minutes.

But the hosts' superiority told in the end with West Ham unable to cancel out McTominay's 97th-minute strike.

It quickly became apparent that West Ham's plan was to pack their defence with as many players as possible and it was nearly undone just 11 minutes in, but Anthony Martial was denied by a crucial Angelo Ogbonna intervention that resulted in the Italian sustaining an injury.

But United's best chance fell to Lindelof in the 27th minute, his header from an Alex Telles corner taking a slight deflection before Lukasz Fabianski tipped it on to the post.

West Ham lost Ogbonna's replacement Issa Diop – who had clashed heads with Martial – at half-time as the recently introduced concussion substitution was used for the first time in English football, and they soon saw Andriy Yarmolenko forced off as well, former Manchester United trainee Ademipo Odubeko replacing him.

United wasted another chance a minute before Yarmolenko's exit, as Fabianski rushed out to thwart Marcus Rashford after Mason Greenwood's low cross was deflected through.

Extra-time was inevitable despite the likes of Bruno Fernandes and Edinson Cavani coming on, but a penalty shootout was not necessary, with McTominay running on to Rashford's smart lay-off and rifling a low volley into the bottom-right corner

What does it mean? – United a step closer to ending trophy drought

It was not a classic by any stretch of the imagination, neither in terms of action nor overall performance, but United got the job done eventually.

United have not won a trophy since 2017 and, even if this display was hardly emphatic, they at least remain on track as they head into the latter stages once again.

Nevertheless, few would blame Solskjaer for being frustrated at the performance, particularly given only five of their 17 shots were on target.

Many have put Luke Shaw's significant improvement this season down to the fact he has credible competition at left-back in Telles, and the Brazilian put in a good shift once again here. His four key passes was more than anyone else on the pitch managed. Telles was unfortunate to be withdrawn just before extra-time, but given he has not played particularly often, it was not a major surprise.

Van de Beek cannot rise to the occasion once again

With Paul Pogba out for a few weeks due to injury, Donny van de Beek had the perfect opportunity to really put himself in contention for a consistent starting role, but he failed miserably. The Dutchman was largely anonymous, failing to create a single chance as he routinely offloaded the ball quickly and offered very little impetus. His 45 touches in 73 minutes was matched by his replacement Fernandes in just 47 minutes.

-  United have won their last nine home FA Cup matches, their joint-longest home winning run in the competition, equalling their nine consecutive home wins between 1908 and 1912.
- West Ham have now been eliminated in each of their last four FA Cup ties against the Red Devils, losing in a different round each time: fourth round in 2002/03, third round in 2012/13, quarter-final in 2015/16 and fifth round in 2020/21.
- McTominay has scored seven goals in 30 appearances for Manchester United this season – as many as he scored in his 84 appearances in his first four seasons between 2016/17 and 2019/20.
- Rashford registered his ninth assist in all competitions for Manchester United this season, his best return in a single campaign for the club and second only to Bruno Fernandes for the Red Devils in 2020/21 (11).
- Aged 23 years and 101 days, Rashford became the fourth youngest player in Manchester United’s history to reach 250 games for the club, behind only Norman Whiteside (22y 192d), George Best (22y 199d) and Ryan Giggs (22y 301d).
- Both Rashford and Martial played their 250th matches for United, only the second time in the club’s history that two players have done so in the same game. The other occasion was also at home against West Ham, in August 1986 when both Mike Duxbury and Frank Stapleton made their 250th appearances.

United go to West Brom in the Premier League on Sunday, while West Ham host rock-bottom Sheffield United next Monday as they look to strengthen their bid for a top-four finish.