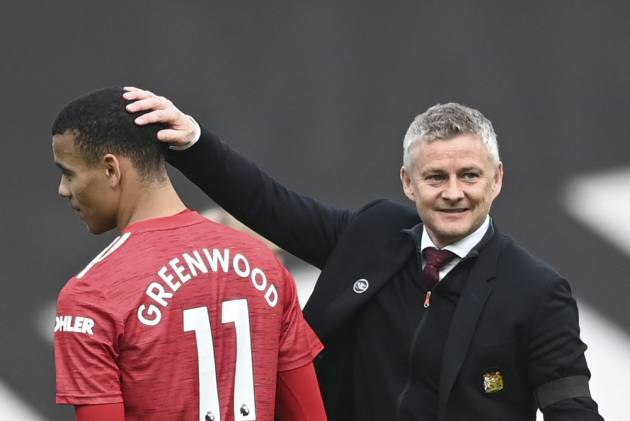 Mason Greenwood scored twice as Manchester United left it late to beat Burnley 3-1 at Old Trafford and make it five Premier League wins in a row for the first time since January 2019. (More Football News)

United had failed to defeat Burnley at home in their last four attempts and could not find a way through in a goalless first half on Sunday that saw Chris Wood have an early goal ruled out.

It was the fourth league game running the Red Devils had failed to score in the first half but Greenwood fired in the opener three minutes into the second period.

James Tarkowski promptly equalised with his first goal of the season, though Greenwood popped up again six minutes from time and substitute Edinson Cavani wrapped up a win that moves United to within eight points of leaders Manchester City.

Man Utd make it 5 #PL wins in a row#MUNBUR pic.twitter.com/4V3FWG9jRS

United fell behind in their last two league games and thought they had conceded inside the opening 14 seconds here, but Wood was marginally offside when heading in.

Paul Pogba had a headed effort saved by Bailey Peacock-Farrell and the Burnley goalkeeper – filling in for the injured Nick Pope – also kept out an angled Marcus Rashford drive.

But Burnley required just 114 seconds to respond as Tarkowski outjumped a number of United players to guide in Ashley Westwood's inswinging corner.

That was the 1,000th Premier League goal United have conceded and they initially struggled to offer up much of a response, Fernandes' easily saved header aside.

However, Ole Gunnar Solskjaer's side slowly increased the pressure and were back ahead late on when Greenwood cut inside and fired away a shot that deflected in off Jack Cork.

Fernandes had a strike blocked on the line by Tarkowski but Cavani added a third goal in added time with a simple tap-in after being set up by fellow substitute Donny van de Beek.

What does it mean? United's title hopes not over yet

This is the first time United have completed a league double over Burnley since 1975-76 and it ensures that the Premier League title race is still just about alive.

Solskjaer's side are back to within eight points of City with six games to go, giving their neighbours a little something to think about.

United are in their best form since Solskjaer first took over two and a half years ago, though it is a different story for Burnley, who are six points above the relegation zone after losing three in a row.

Greenwood endured a disappointing first half to the campaign but has been back to his clinical best in recent weeks with some key goals.

The youngster's brace here from five shots takes him to 15 Premier League goals, which is the joint most of any United teenager in the competition alongside Wayne Rooney.

United had all 11 players inside their own box when defending the corner from which Tarkowski scored, the Burnley centre-back outjumping Aaron Wan-Bissaka, Harry Maguire and Victor Lindelof to head home.

Some of the credit has to go to Westwood for the quality of the delivery, though, with that the 16th Premier League set-piece goal he has assisted since the start of 2012-13, behind only Christian Eriksen (24), Chris Brunt (24) and Gylfi Sigurdsson (20).

- United have won five Premier League games on the spin for the first time since Ole Gunnar Solskaer's first six league matches in charge of the club (six straight wins).

- Burnley have lost three Premier League games in a row for only the second time this season, and for the first time since their opening three games of the season back in September and October.

- In Premier League games in which both teams score, Burnley have won just three of the last 18 such matches, including only one of the last eight (D4 L3) – a 2-1 victory at Everton last month.

Solskjaer's side return to action with a trip to Leeds United next Sunday, while Burnley – still in need of points to confirm their Premier League safety – travel to Wolves the same day.