Bruno Fernandes, Mason Greenwood and Edinson Cavani were on target as Manchester United fought back against Aston Villa on Sunday 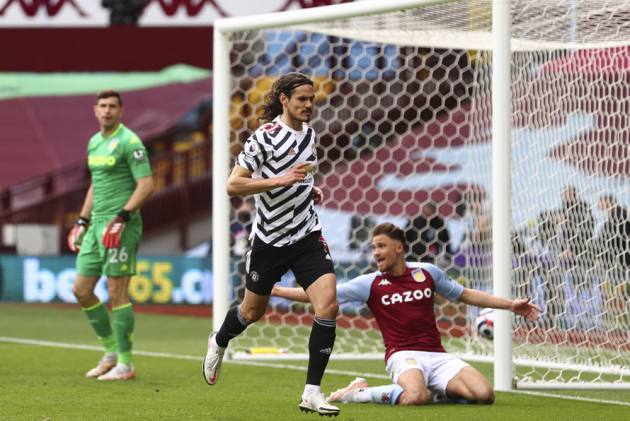 A late defeat for City to Chelsea on Saturday has seemingly only prolonged the inevitable but United had to work hard to preserve their unbeaten away status in the league at Villa Park.

Bertrand Traore's fine strike, albeit United's defending left plenty to desire, had Villa dreaming of a first home win over the Red Devils since an EFL Cup tie in 1999.

United started strongly and Luke Shaw stung the palms of Emiliano Martinez before Marcus Rashford got in behind to tee up Fernandes to stab wide.

It was Villa who went ahead in style, though. Douglas Luiz picked up the pieces after Niall McGinn had dispossessed Scott McTominay to tee up Traore, who turned Victor Lindelof and fired into the top-right corner.

Greenwood's shot across the face of goal brought the best out of Martinez, while Dean Henderson also palmed away Watkins' low shot.

United were level in the 52nd minute when Fernandes rolled home from 12 yards after Luiz clumsily tripped Paul Pogba in the area.

27 - Bruno Fernandes has scored 27 goals for Manchester United in all competitions this season, the most by a midfield player for a Premier League club in a single campaign since Frank Lampard for Chelsea in 2009-10 (also 27). Machine. pic.twitter.com/YSrLpaO2p2

Four minutes later, Greenwood had spun Tyrone Mings and beaten Martinez with a drive into the near corner he really ought to have saved.

United lost captain Harry Maguire to an ankle complaint but Cavani's glancing header from Rashford's pinpoint cross gave Villa no hope, and Watkins received a second yellow and a subsequent red for a needless dive late on.

What does it mean? Comeback kings delay City's ticker-tape

United are now unbeaten in 25 consecutive away Premier League games, while it is now 22 games unbeaten away at Villa for the Red Devils.

Solskjaer's side have enjoyed doing things the hard way this term. This was the 10th occasion in which they have conceded the first goal in an away league fixture – but United have won nine and drawn one of those.

This was the first of three league matches in the space of five days for United due to the rearranging of their fixture against Liverpool, postponed last week due to fan protests against the Glazer family, and this win will do little but delay the arrival of the trophy in the blue half of Manchester.

Fernandes' goal was his 27th goal in all competitions this term, the most by a Premier League midfielder in a single campaign since Frank Lampard in 2009-10.

The Portuguese was a figure of calm for United, converting his spot-kick with trademark coolness, while he also finished with three key passes.

Greenwood is a man in form for United, with this his fifth goal in as many Premier League matches. His previous five strikes in the competition came across 29 games.

In total, he now has 16 Premier League goals for United – the most of any teenager for the Red Devils, beating the 15 managed by Wayne Rooney.

- United have won 10 Premier League matches after conceding first this season, a record by a team in a single season in the competition. They have also recovered 31 points from losing positions, with only Newcastle United in 2001-02 recovering more in a single Premier League season (34).

- Only Sheffield United (13) and Fulham (11) have lost more home Premier League matches than Villa this season (8).

- United's 25 away league games unbeaten have come in Fernandes' first 25 away Premier League appearances for the club. In Premier League history, only Gabriel Jesus (26) has had a longer unbeaten away run from their first away appearance in the competition.

- Cavani netted his fifth Premier League goal as a substitute this season, equalling the record in a single season for Manchester United, alongside Solskjaer in 1998-99 and Javier Hernandez in 2010-11.

- Maguire was substituted in the second half, ending a run of 71 consecutive Premier League matches for Manchester United in which he completed 90 minutes. This is the joint-longest such run, alongside Gary Pallister between 1993 and 1995.