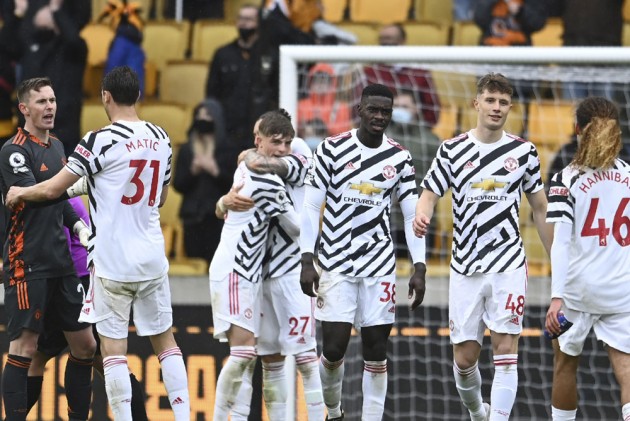 Manchester United ended the Premier League season without losing an away match as they beat Wolves 2-1 at Molineux on the final day. (More Football News)

With one eye on next week's Europa League final and with second place in the table secure, Ole Gunnar Solskjaer rested the majority of his key players against a Wolves side playing under coach Nuno Espirito Santo for the final time.

Anthony Elanga marked his second Premier League start with the opening goal, but Nelson Semedo equalised for the home side to the delight of the reduced-capacity crowd.

It proved enough for the Red Devils, who also handed first-team debuts to youngsters Hannibal Mejbri and Will Fish as late substitutes.

Elanga's control and shooting had let him down with two early opportunities, but he made no mistake with his third, planting a firm header past Rui Patricio from a superb left-foot cross from Daniel James.

Wolves, who lost the lively Adama Traore to an apparent hamstring problem, levelled six minutes before the break after exploiting the United left. Nemanja Matic's slip allowed Leander Dendoncker to play in Fabio Silva, who cut the ball back for Semedo to sweep into the bottom-left corner.

Brandon Williams had an unlikely chance to restore United's lead but Patricio saved well at the near post from the full-back's effort.

However, the visitors got their second goal before the interval, Mata sending Patricio the wrong way from the penalty spot after a VAR check showed Romain Saiss had caught the ankle of Donny van de Beek.

Wolves enjoyed the majority of the second-half possession but struggled to muster attempts on Dean Henderson's goal, with Silva denied a good chance by the covering Axel Tuanzebe after Eric Bailly's error.

Elanga and Amad Diallo threatened on the break late on but Patricio was on hand to keep the difference to one goal.

What does it mean? United complete 2020-21 unbeaten on the road

They end the season second, their highest finish since 2017-18, although the 12-point gap to champions Manchester City shows their need to strengthen before next term. Wolves end the campaign in 13th, with 45 points.

Elanga is the 19th teenager to score in the Premier League for United, a tally bettered only by Arsenal (20).

The 19-year-old may not be involved against Villarreal, but he has made significant strides into the first-team picture in recent weeks and could prove a reliable option for Solskjaer in 2021-22.

Bailly a concern ahead of Europa League final

With Harry Maguire unlikely to be fit, it is expected Bailly will partner Victor Lindelof against Villarreal next week.

However, the Ivorian's performance was far from steady here and he needed his young centre-back partner Tuanzebe to spare his blushes.

While Wolves now look ahead to a new season with a new man in charge, United have three days to prepare for the Europa League final in Gdansk.