Edinson Cavani has made a positive impact in a short time at Manchester United and could be asked to stay on for another season. 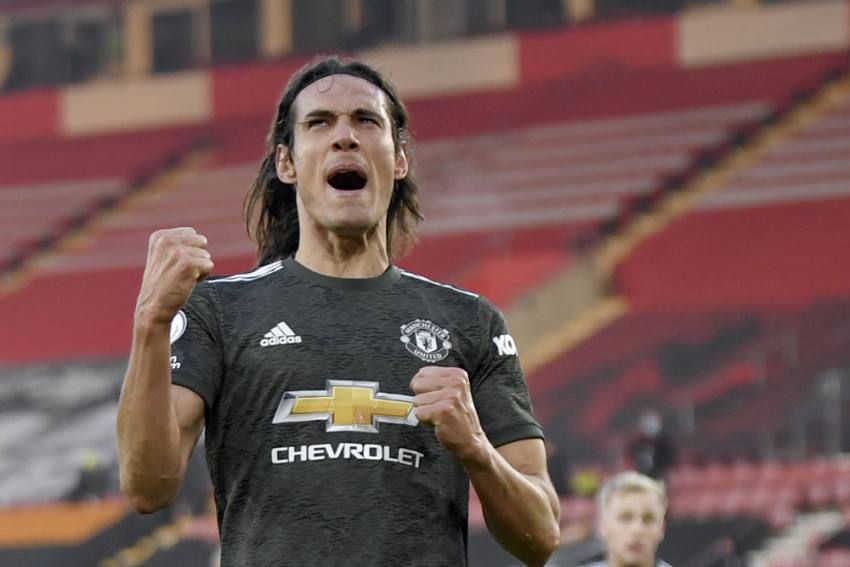 Manchester United will holds talks with Edinson Cavani "in the near future" as his short-term contract nears its end, manager Ole Gunnar Solskjaer has declared. (More Football News)

The Uruguayan striker joined in October on a season-long deal as Solskjaer found an experienced frontman to complement the likes of Marcus Rashford, Anthony Martial and Mason Greenwood.

At the time of his arrival, United announced they had an option to extend Cavani's stay for a further year, and the former Paris Saint-Germain player is reportedly eager to remain at the club.

He has scored six times in eight Premier League starts and nine substitute appearances, at an average of one goal every 140.83 minutes.

That is the best minutes-per-goals ratio in the United squad, in terms of this season's Premier League, with Bruno Fernandes (144.21 minutes per goal) in second place.

Solskjaer has said he considers Cavani as "definitely a starter" and has included the 34-year-old in United's line-up for their last four Premier League games.

"I can only say Edinson has done well," Solskjaer said, ahead of Sunday's home game against Newcastle United.

"I've been impressed by him. He's really gelled in the group and we'll sit down with him and speak with him in the near future to see his plans and our plans.

"It's a good discussion. You always speak to your players, and with his contract situation at the moment, we're very pleased with what he's done."

With his words and his actions, Solskjaer appears keen for Cavani to stay at Old Trafford.

Having become PSG's record scorer with 200 goals, Cavani has helped United mount a title challenge in England, albeit one that now appears to be fading.

Manchester City have streaked 10 points clear of United and Leicester City in the Premier League, heading into the weekend, and it would take some turnaround for Pep Guardiola's team to be denied a third Premier League crown in four years.

"We can't hide the fact we have dropped off on our form in the last few weeks," Solskjaer said.

United's Norwegian boss said the team needed to rediscover their verve, saying: "Newcastle will be a very important game for us."

To acknowledge the title is heading to City at this stage would be a weak move for any manager of United.

"Whatever other teams do, we can't control. We've just got to control ourselves. We are second, and of course your ambition then is to not end any lower than that.

"We're going to have to get a good run together if we're going to put pressure on City, and it should start on Sunday of course."

Cavani and Donny van de Beek missed the 4-0 Europa League win at Real Sociedad on Thursday with muscle injuries but could come into contention for the Newcastle game, but Paul Pogba remains sidelined.

Solskjaer says United's players must give their all at this stage of the campaign, saying: "Of course it's relentless. You've got to put your body on the line."