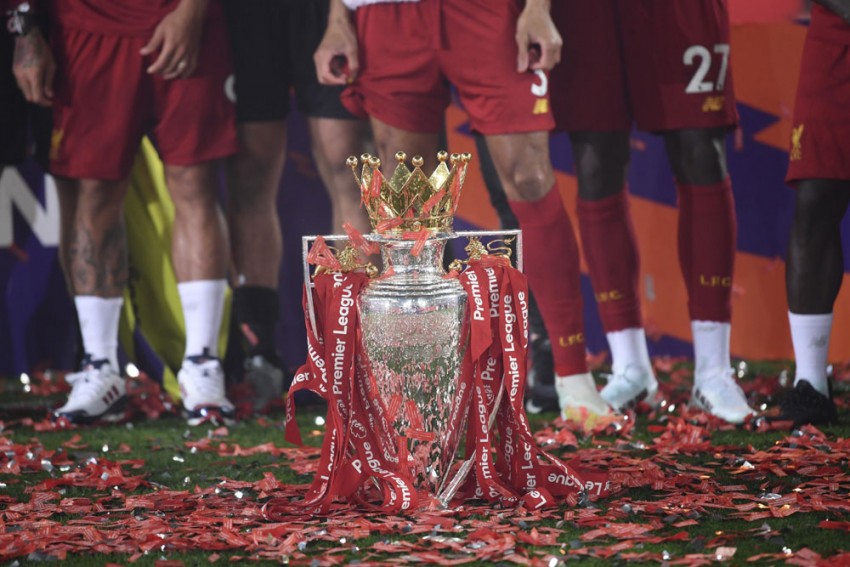 Manchester City has broken its transfer record, Chelsea looks to be on the brink of doing the same, while Manchester United has spent around $150 million in fixing two of its weakest positions. (More Football News)

Liverpool? Well they're just happy to have their best player back from a serious injury.

For very different reasons, each of the Premier League's top four teams from last season appear to be in a healthy position heading into a 2021-22 campaign that will be played in front of capacity crowds for the first time in 17 months.

England's lucrative top division for some time has had a so-called "Big Six" of City, United, Chelsea, Liverpool, Tottenham and Arsenal. Leicester, an unlikely champion in 2016 and a fifth-place finisher the last two seasons, can rightly argue it should be a "Big Seven."

The coming season, though, looks to be a four-team race for the title, even if things could change dramatically by some late movement in a transfer window that closes on Aug. 31.

Signing Jack Grealish for $139 million was a big statement of intent by City, but that only served to strengthen a midfield department where Pep Guardiola already had enviable riches. It is a striker the champions really need following the departure of Sergio Aguero after 10 years, and there's one they are targeting in particular.

Harry Kane would cost more than Grealish — potentially much, much more — and City appears willing to spend another British-record figure if only Tottenham would negotiate. But, according to Guardiola, that isn't currently the case, even if Kane seems keen on the move.

If it happens — and it's a big "if" given how tough a negotiator Tottenham chairman Daniel Levy is — City would have a squad mighty enough to blow away its rivals. There would barely be a weakness. Even City's second team could mount a top-four challenge.

As it is, the lack of a genuine top-class striker — Gabriel Jesus doesn't convince as a finisher, despite his work rate — leaves England's other top teams with a glimmer of hope.

Chelsea has already proved a genuine rival for City, having won their last three meetings — capped by a 1-0 victory in the Champions League final in May.

Having built the sturdiest defense in Europe, with Jorginho and the indefatigable N'Golo Kante protecting a back five, Chelsea manager Thomas Tuchel has focused on adding an attacking spearhead to the team and that looks like being Romelu Lukaku.

The Belgium striker reportedly underwent a medical examination on Monday ahead of a club-record $135 million transfer from Inter Milan.

Lukaku's return to Stamford Bridge — he was at Chelsea from 2011-14 — will turn the London club into a huge title challenger, potentially giving Tuchel as strong a squad as Guardiola has. After all, it comes after Chelsea's spending spree of nearly $300 million in the last offseason.

A prolific striker was the only thing missed for Tuchel last season and Lukaku would solve that.

While the  signing of Jadon Sancho, for $100 million, came as no real surprise, United's acquisition of Raphael Varane for a likely fee of around $50 million hadn't been trailed. As improbable was the swift and trouble-free way the club concluded the deals, a far cry from recent transfer windows that have been hectic at Old Trafford.

It points to a club that is increasingly sure of what it wants and building a strong team under Ole Gunnar Solskjaer, who still hasn't won a trophy since joining late in 2018. United may just be a defensive center midfielder away from having a title-winning team, but even that mightn't stop them this season.

Key will be striker Edinson Cavani staying fit and if Mason Greenwood, the young forward carrying so much hope and expectation, kicks on again. Paul Pogba appears to be staying for another season, and Solskjaer will hope the midfielder can transfer his international form with France to his club.

United finished in second place, 12 points behind City, last season and will believe the gap can be closed.

Liverpool's defense of its 2019-20 title can best be described as underwhelming — the team went from champions by 19 points to trailing home 17 points behind City in third place — but there was one big reason for that.

Virgil van Dijk's knee injury kept him out for all but one month of the campaign and capped a season when Liverpool manager Jurgen Klopp was struck by one defensive injury after another. In the end, creeping into the Champions League qualification positions after a strong finish was regarded as a success.

Van Dijk is back now, though he might need another month to get back to full fitness, and that will come as a huge relief to Klopp, who has reinforced his defense further by signing Ibrahima Konate from Leipzig. Suddenly, the biggest issues might be in midfield.

Georginio Wijnaldum's departure to Paris Saint-Germain robs Liverpool of one of its most consistent performers of the last four years and he hasn't been replaced. That will place more strain on captain Jordan Henderson, who starting to pick up injuries regularly, and Fabinho. Klopp will need Thiago Alcantara to have a better second season than his first, when he struggled to adapt to the pace of the league.

That said, the front four of Diogo Jota, Sadio Mane, Mohamed Salah and Roberto Firmino can be relied upon for plenty of goals. And with Van Dijk mopping up at the back, another title charge is likely at Anfield.

Expect Leicester to have another solid year, especially now it has plenty of options in attack following the signing of Patson Daka, but the team just doesn't have the financial strength of the top four and will again have to balance competing on domestic and European fronts.

That is not the case for Arsenal, which failed to qualify for European competition for the first time in 25 years. It should ensure Mikel Arteta's team improves on an eighth-place finish but getting back in the Champions League looks a big ask and will require a much more prolific season from striker Pierre-Emerick Aubameyang.

As for Tottenham, under a new manager in Nuno Espirito Santo, it all really hinges on whether Kane stays or goes. Man City will attest to that.  (AP)