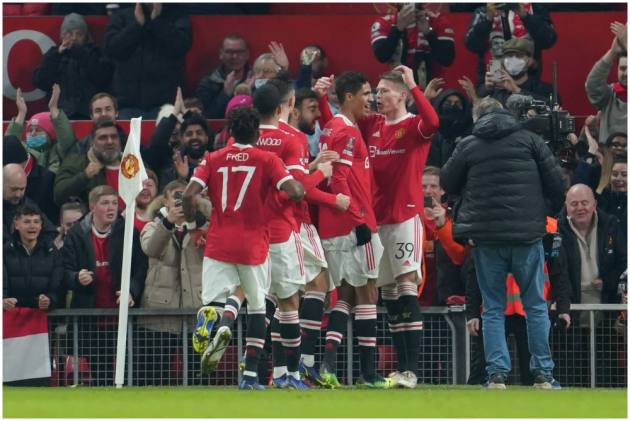 Without the injured Cristiano Ronaldo, Manchester United laboured to a 1-0 win over Aston Villa in the third round of the FA Cup 2021-22 thanks to Scott McTominay’s early goal on Monday. (More Football News)

McTominay met a curling cross from fellow midfielder Fred with a glancing header in the eighth minute to seal a home match against second-tier Middlesbrough in the fourth-round next month.

Yet the victory will do little to inspire confidence among United’s fans that Ralf Rangnick, the interim manager until the end of the season, is close to getting the best out of the fallen giant of English soccer.

Ronaldo was absent because of a hip injury that Rangnick described as “minor,” and United was fairly lackluster as an attacking force at Old Trafford, especially in the second half as Villa launched a wave of attacks.

The visitors had two goals disallowed -- both for offside -- and United goalkeeper David De Gea was again his team’s most impressive performer with a string of diving saves. Ollie Watkins also struck the crossbar in the first half after an error by United defender Victor Lindelof.

“We had to suffer a lot on the pitch,” United center back Raphael Varane said. It proved to be a disappointing return to United’s stadium for Steven Gerrard, the Villa manager who was handed a hostile reception owing to his previous links with Liverpool -- United’s great rival.

Gerrard was unable to select Brazil playmaker Philippe Coutinho, who was signed on loan from Barcelona last week but is currently in France awaiting a work permit.

Still, in Jacob Ramsey and Emi Buendia, Villa had two midfielders with the guile and drive of Coutinho and who outshone more celebrated players in United’s midfield. Rangnick has called for United to control games better but his players weren’t able to do that against Villa, whose passing was sharper and more incisive.

“To say that this was a perfect game, nobody would believe that. Of course it was not,” Rangnick said. “We still have quite a few things we can get better at, but a clean sheet was important today and we worked together. “Still a lot of things to improve but it is easier to do that with a 1-0 win.”

The most contentious moment came when Danny Ings thought he equalized by bundling the ball home from close range in the 51st. The buildup to the goal was scrutinized at length by VAR, and it was deemed that Ramsey had been standing in an offside position before he became active in blocking off Edinson Cavani prior to Ezri Konsa heading the ball across goal to Ings.

Eight minutes later, Watkins slid in to score but again the goal was disallowed for offside against Ings in the buildup. “The lads gave a lot in terms of performance but we need to learn and close the gap from a performance that was nearly good enough,” Gerrard said. “We dominated for large parts but we were not ruthless enough.

“I’ve seen enough tonight in terms of the performance to know that I can get to where I want to get to but we need to learn and learn quickly.” United will be hopeful that Ronaldo is fit to return for the team’s next game, at Villa in the Premier League on Saturday.

“He’s told me that he’s had that problem for the last couple of days,” Rangnick said of Ronaldo. “Again, in a cup game when you can play 120 minutes, I thought it would be better to not take any risks.”