Manchester United Vs Liverpool Live Streaming: When And Where To Watch Epic FA Cup Round 4 Match 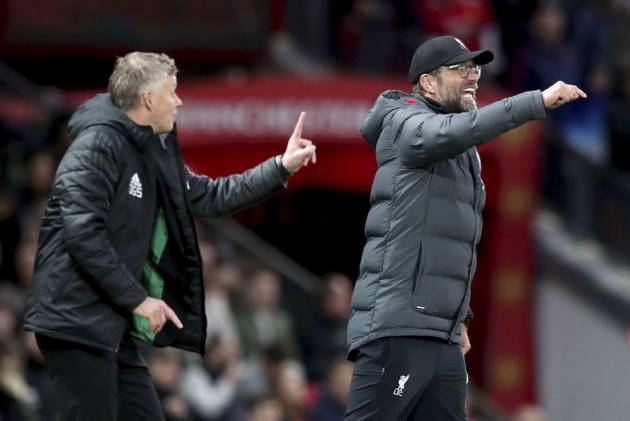 Ole Gunnar Solskjaer's Manchester United side face Liverpool in the fourth round of FA Cup a week after playing out a 0-0 draw with their fierce rivals in the Premier League. That Anfield result was part of a five-game winless run in the league for the reigning EPL champions, who saw their 68-match unbeaten home run in the top flight ended by Burnley. The Reds have now failed to score in four consecutive league games for the first time since May 2000, while you have to go back to Mainz in December 2006 for the last time that happened to a team managed by Jurgen Klopp. (More Football News)

Their lack of goals is not for want of trying. Liverpool have had 87 shots since Sadio Mane scored their last goal against West Brom in a 1-1 home draw on December 27, with 27 of those coming against Burnley. The concern is the relative lack of precision from the usually formidable front three of Mane, Mohamed Salah and Roberto Firmino, as well as the quality of chances created. Liverpool's expected goals tally against the Clarets was just 1.6, with only six of their shots hitting the target.

Solskjaer would surely want United to harness the spirit of the 1999 treble-winning side. United dramatically beat the Reds 2-1 at the same stage of the FA Cup 22 years ago courtesy of late goals from Dwight Yorke and Solskjaer himself, then went on to complete a famous treble. The Red Devils are still in the hunt for three trophies this season and face an out-of-sorts Liverpool side who are smarting from a shock 1-0 home defeat to Burnley.

United are unbeaten in their last seven home games against Liverpool in all competitions -- winning three and drawing four -- since a 0-3 loss in march 2014.

Klopp insists Liverpool will "go again" and believes it is on him to change the way he communicates with his players to get the Reds firing again.

"Of course we go again, no doubt about that. I said what I thought, like most of the time actually," Klopp told a pre-match news conference... I said it when things don't work out on the pitch as we want them to work out, then there's an issue."

Klopp's team drew with United in a turgid and goalless Premier League game last weekend. The Liverpool boss again plans to put out a strong line-up against an in-form United, and said of the clash with the Red Devils: "It's a different competition.

"We want to go through and for this we have to play really well because United is in a really good moment, they get the results they wanted so far. We have to be ready 100 per cent."

Solskjaer says dumping the Premier League champions out once again could be a big moment in what he hopes will be a glorious season.

"Of course we can transform a few things from that season. We know that there's tight moments, very fine margins. We know in that season we were close to going out against Liverpool," said the United boss. "Peter Schmeichel saved a penalty from [Arsenal's] Dennis Bergkamp in the semi-final in injury time. Those moments, I think they gave us the mental advantage, especially in the semi-final... But against Liverpool as well in that fourth round, when you get that boost of turning 1-0 down to a 2-1 win against a big team it's massive."