Ronaldo has trained with United since Tuesday, having had a preseason at Juventus and played the full game for Portugal in a World Cup qualifier 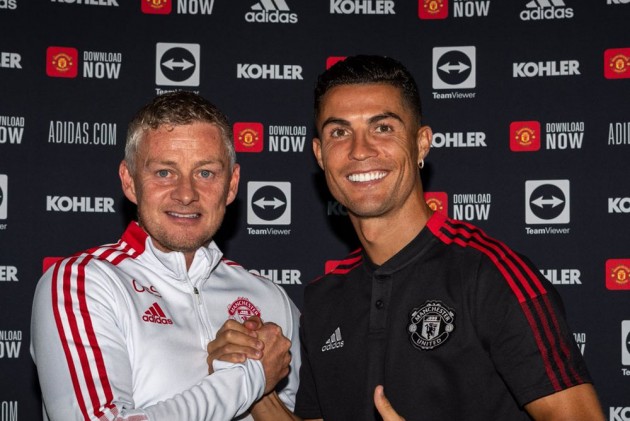 Cristiano Ronaldo has been putting pressure on Manchester United manager Ole Gunnar Solskjaer to hand him a start in the first appearance of his second spell at the English club. (More Football News)

Solskjaer isn't giving anything away.

"He will definitely be on the pitch at some point,” Solskjaer said on Friday, a day before Ronaldo makes his Old Trafford return in an English Premier League game against Newcastle following his stunning move from Juventus.

Ronaldo has trained with United since Tuesday, having had a preseason at Juventus and played the full game for Portugal in a World Cup qualifier against Ireland last week. He scored two late goals to become the all-time leading scorer in men's international matches with 111.

Solskjaer played alongside Ronaldo in the Portugal star's first spell at United, from 2003-09, and said he was already raising the bar in training.

"We know what he has achieved in his career but he has come here to achieve more and to put demands on,” Solskjaer said, in a video call, about the five-time world player of the year. "That’s what he does — he has lived his life with the discipline of a top, top player.

"There's no place to hide when you have winners like him. You can't go into training and give 95% and not be focused. That's what he demands of himself and everyone else.”

Solskjaer said he expects Ronaldo to play at the top level until he is 40 years old, like another United great in Ryan Giggs.

But he warned not to expect the same Ronaldo that first arrived at United as a skinny 18-year-old winger.

"I don’t think you are going to see 18, 19, 20 stepovers before he goes past you,” Solskjaer said with a smile, "but he still has those stepovers, the shift when he shoots, those accurate finishes.

"He is one of the best, of course, in the air. His desire to get on the end of crosses is second to none. He knows the game more, which positions to drop into, and when to run in behind. And he's still as quick, it looks like from the stats. He is a shining, leading star for everyone to look up to, and he's going to be a leader in this dressing room."