With these medals India's tally has now swelled to 10. Mariyappan Thangavelu was pipped to the post by Sam Grewe of USA who cleared 1.88 on final attempt 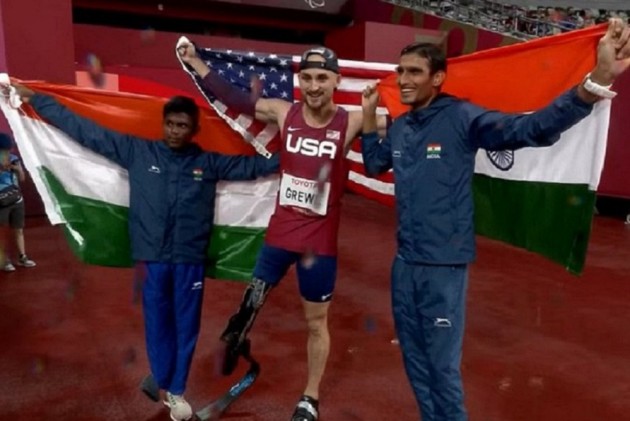 Defending champion Mariyappan Thangavelu and Sharad Kumar won a silver and bronze respectively in the men's high jump T42 event as India's medal tally at the Paralympics touched an unprecedented 10 in Tokyo on Tuesday. (Highlights | News)

Mariyappan cleared 1.86m while the American gold winner Sam Grewe succeeded in soaring above 1.88m in his third attempt. Kumar took the bronze with an effort of 1.83.

The third Indian in fray and 2016 Rio Paralympics bronze-winner, Varun Singh Bhati ended seventh out of nine competitors after he failed to clear the 1.77m mark.

The T42 classification is for athletes with a leg deficiency, leg length difference, impaired muscle power or impaired passive range of movement in the legs. The athletes compete in a standing position.

The 26-year-old Mariyappan was touted as a sure shot medal for India after rising to fame with his gold in the Rio Games five years ago.

The Tamil Nadu athlete suffered permanent disability in his right leg after it was crushed under a bus when he was only 5.

Raised by a single mother after his father abandoned the family, Mariyappan battled abject poverty growing up as his mother worked a labourer before becoming a vegetable seller.

Kumar, who hails from Patna, Bihar, suffered a paralysis in his left leg as a two-year-old after being administered a spurious polio vaccine.

He is a two-time Asian Para Games gold-medallist.