A mob of Marseille fans breached the club's facilities on Saturday, seemingly in protest over the club's poor form and the leadership of president Jacques-Henri Eyraud 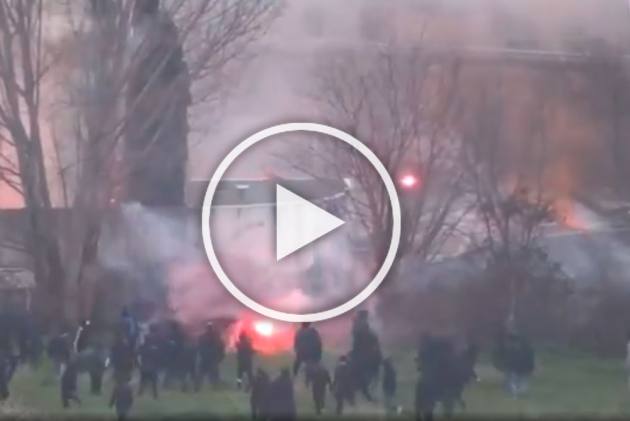 Marseille's Ligue 1 match with Rennes has been postponed after violent protests from supporters at the club's training ground. (More Football News)

A mob of Marseille fans breached the club's facilities on Saturday, seemingly in protest over the club's poor form and the leadership of president Jacques-Henri Eyraud.

Andre Villas-Boas admitted on Friday that he expects to leave at the end of the season, with Marseille sitting way off the pace in Ligue 1.

Marseille have lost their last four matches in all competitions, and are without a win in as many league games.

Videos and images shared on social media of fans storming the club's training ground - where the players had gathered before they were due to face Rennes - also showed fires had been started, while L'Equipe also claimed that defender Alvaro Gonzalez was hit by a projectile.

France, Marseille --- Soccer fans stormed into the team’s training ground hours before a Ligue 1 game against Rennes as they protested against the soccer club’s officials, the French multimedia outlet RMC Sport reported on Saturday pic.twitter.com/3CshIOqbxD

Some Marseille fans broke into the club’s training ground centre this morning.

Marseille subsequently requested the postponement of their match with Rennes, which was scheduled to kick-off at 21:00 local time (20:00 GMT).

The LFP, with the agreement of Rennes, approved the request, and it remains to be seen when the match will be played.

A statement on Ligue 1's official website read: "The match of the 22nd day of Ligue 1 Uber Eats between Olympique de Marseille and Stade Rennais FC has been postponed.

"Given the incidents that occurred this afternoon at the Olympique de Marseille training center, the OM – Stade Rennais FC match has been postponed to a later date."