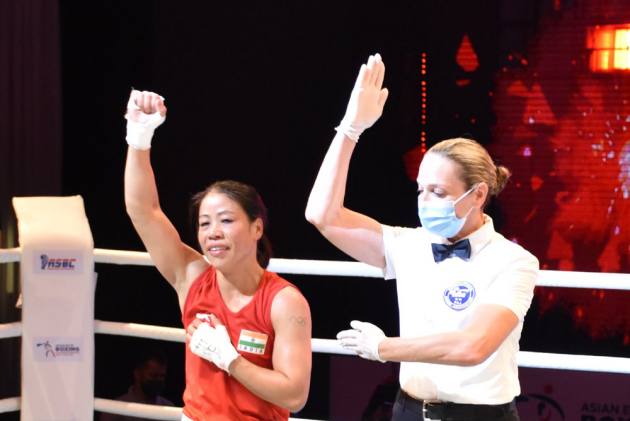 The Olympic-bound M C Mary Kom (51kg) and former youth world champion Sakshi (54kg) were among four Indian women boxers who stormed into the Asian Championship finals after notching up exciting victories while Pooja Rani (75kg) got a walkover in Dubai on Thursday. (More Sports News)

It was a memorable tournament debut for Lalbuatsaihi (64kg), who outboxed Noura Almutairi of Kuwait to such an extent that she decided to concede the bout in the second round. Next up for the boxer from Nagaland is Milana Safronova of Kazakhstan.

In the 75kg category, defending champion Pooja Rani got a walkover into the finals after her Mongolian opponent Munkhbat Myagmarjargal pulled out without specifying the reasons.

"We got to know a couple of hours before the bout that her opponent has pulled out. The reasons were not told to us," Indian women's boxing's High Performance Director Raffaele Bergamasco told PTI.

However, the Tokyo-bound duo of Lovlina Borgohain (69kg) and Simranjit Kaur (60kg) along with Monika (48kg) and debutant Jaismine (57kg) settled for bronze medals after losing their respective semifinal bouts.

Monika went down 0-5 to second seeded Alua Balkibekova of Kazakhstan, while Jaismine too was bested in a unanimous verdict by another Kazakh in Vladislava Kukhta.

Simranjit, who recently recovered from COVID-19, also lost to a Kazakh, Rimma Volossenko, in a unanimous verdict. Lovlina was beaten by Navabakhor Khamidova of Uzbekistan in a split decision.

In contrast, the top-seeded Mary Kom dug from her huge reservoir of experience to outwit the sprightly Altantsetseg.

"It has taken a lot to adjust to the humid weather here. Today, I was a bit slow in the first round but got my rhythm from the second round onwards. I had already fought her once so it didn't take much to understand her gameplan," Mary Kom told PTI.

The veteran's right hooks were particularly impressive in a compelling performance. She fought with a perilously low guard despite the aggressive intent shown by her rival and relied on her sharp reflexes to score on counter-attacks.

"The guard wasn't needed, I knew her quite well," she quipped.

The 38-year-old will now be gunning for her sixth gold medal at the continental showpiece. She will be up against Kazakhstan's Nazym Kyzaibay, a two-time world champion.

"I have faced Nazym earlier and have even defeated her in a couple of past tournaments. Let's see what's the challenge I get this time," said Mary Kom.

Sakshi also endured a tough one against Zholaman but came out trumps, riding on her grit. She will face Uzbekistan's Sitora Shogdarova in the summit clash.

Earlier, in an intense contest, Monika just could not keep pace with Balkibekova, who craftily dodged the Indian's attacks and connected some eye-catching combination punches to dominate the proceedings.

On Wednesday night, the Olympic-bound Ashish Kumar (75kg) lost 2-3 to Asian Games silver-medallist Abilkhan Amankul of Kazakhstan in the quarterfinal.

Also going down in the quarters was Narender (+91kg). He lost 0-5 to Kazakhstan's Kamshibek Kunkabayev.

Of these, Panghal and Krishan are bound for Tokyo Olympics.

India have secured an unprecedented 15 medals in the tournament.