T20 World Cup: Match Against India Is Over, Focus On Next Game, Babar Azam Tells Pakistan

Babar Azam cautioned Pakistan against going "overboard" in celebrating the historic win over India in their first match of the ICC Men's T20 World Cup 2021. 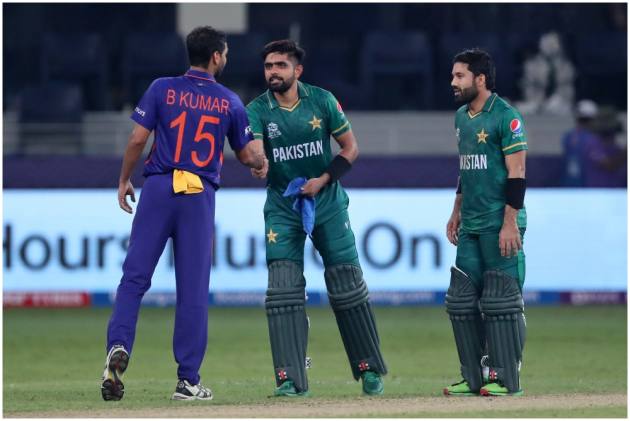 Pakistan skipper Babar Azam on Monday cautioned his team against going "overboard" in celebrating the historic win over India as it was only the first match of what remains a challenging ICC Men's T20 World Cup 2021 campaign.  (More Cricket News)

Former cricketer and ex-coach Misbah-ul-Haq and Waqar Younis too echoed the sentiments.

Pakistan handed a resounding 10-wicket thrashing to India in the much-anticipated match in Dubai on Sunday night, ending a 12-match losing streak against the arch-foes in World Cups.

"Let's celebrate, let us go back to the hotel and enjoy this moment with our families but don't forget this match is now over and we must get back on track to preparing for the other matches of the tournament," Babar said to his players in a video shared by the Pakistan Cricket Board.

Skipper Babar said that after beating India there would be more expectations from the team now and in order to live up to them, the players will have to work harder.

"I want every player to celebrate this moment tonight but then go back to realising what his role is in the team and what is expected of him in the remaining matches. We have not just come here to win against India, we have come here to win the World Cup, always remember that."

Misbah, who was forced to resign as head coach of the national team one month before the tournament, said the players must remain focussed on winning the mega-event.'

Speaking on a sports channel with Waqar, who also resigned as bowling coach before the tournament, Misbah said: "I just hope we don't go overboard with the celebrations and forget we have more matches to play and win in the World Cup."

He further added that the team displayed perfect discipline and executed its plans to perfection against the strong Indian team.

"Now the task is to ensure we continue to play with the same discipline with every player fulfilling his role as he did against India if we are to win the tournament."

Misbah and Waqar both resigned soon after the team returned from a tour of the West Indies. The development took place a few days after former captain and commentator Ramiz Raja took charge as Pakistan Cricket Board chairman on September 13.

"This is only the first match and we are still to play against other tough opposition. If we beat India today it does not mean we should take it for granted we can also beat New Zealand, Afghanistan for that we will have to continue the hard work."

"We must all do soul searching and think what we did right today to win the match in such a fashion and to also think and keep working on the weak areas where we still need to continue to do work to remove them. It is about honest self-assessment," he said.

Saqlain also said that the players must not get carried away with the celebrations after the win over India as the sport is cruel and every match is a new one.

Former Pakistan opener, Mohsin Khan said that winning the toss was vital for Pakistan and Babar took the right decision to chase down a total as the dew was a factor and will remain one through the tournament.

Meanwhile, former Test pacer Aaqib Javed said that Shaheen Shah Afridi's burst of two wickets with the new ball and Hasan Ali's one scalp put India on the back foot and they never recovered after that.

"I liked the way the bowlers displayed so much discipline and game awareness today. Haris Rauf used the slower balls to a great advantage. India is a top side and to beat them by 10-wickets is amazing. (I) Don't rule out a rematch with them perhaps in the final," said Aaqib, a member of the 1992 World Cup-winning squad.

"Everything went according to plan today starting with the toss. I don't think any other team which loses its head coach and bowling coach just before a World Cup can perform like this. This can only be done by Pakistan which produces remarkable cricket when least expected," Latif said.

Former Test pacer Umar Gul said he has no doubt that India would make a strong comeback in their remaining matches. "They are a very strong side and they will be smarting after this defeat. Expect them to come back strongly."