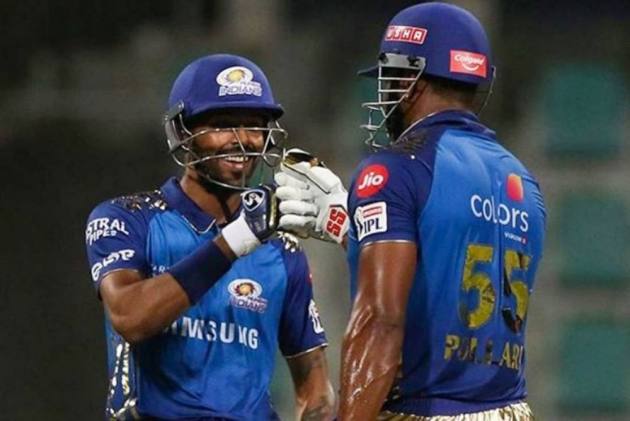 Kieron Pollard says Mumbai Indians' struggling players have belief in each other's ability, asserting that they will wriggle out of the difficult situation as they continue to be in the hunt for the IPL Play-offs. (More Cricket News)

The defending champions defeated Punjab Kings by six wickets on Tuesday night to stay afloat even as their big guns and youngsters are still striving to get back their rhythm. (Highlights)

"We don't actually plan for things to be like this. What we have is belief in one another and we believe we can get out of any situation," Pollard, who completed 10,000 runs in T20 cricket and also touched 300-wicket mark, said at the post-match media interaction.

Mumbai Indians are placed fifth with 10 points from 11 matches so far. "We have put ourselves in this situation and the players and the management are sticking together.

"It is a matter of giving all the guys confidence and finding the best solutions. These are guys who have done it for us time and time again." Pollard did not appreciate the criticism the team is facing from outside.

"It's difficult when you have a lot of other people on the outside as well speaking about it. These people speak and they don’t understand what people go through as cricketers. So for us, it is about backing individuals and trying to give them the confidence to do well because they are young, talented individuals."

The West Indian said their focus is on present when asked how the pitches are likely to behave during the T20 World Cup that will begin immediately after the conclusion of the IPL.

"To be honest, the World Cup is irrelevant at this point of time, we are playing the IPL tournament. When you are in a tournament as an individual, you look to think about the present and not look too far ahead," he said.

"Everyone one is going on about the pitches, but you cannot get what you want all the time. As a professional athlete, you need to adapt. For me, personally it is about staying in the present and dealing with what is in front of us as a team," Pollard, who starred with an all-round performance (2/8 and 15 not out in 7 balls) added. Pollard also had words of praise for Saurabh Tiwary, who made a crucial 45 in MI's winning cause.

"Every time he's gotten an opportunity for us, more often than not, coming out and churning out numbers of batting in those crunch situations. "And that is a sign of a guy who is focused on what he needs to do, sometimes he misses out for invariable reasons, but that's the nature of team sports. He was the backbone for us. well played to him," he added.