Mauricio Pochettino admits it would be disappointing if Paris Saint-Germain miss out on Ligue 1 glory, ahead of a crunch final day 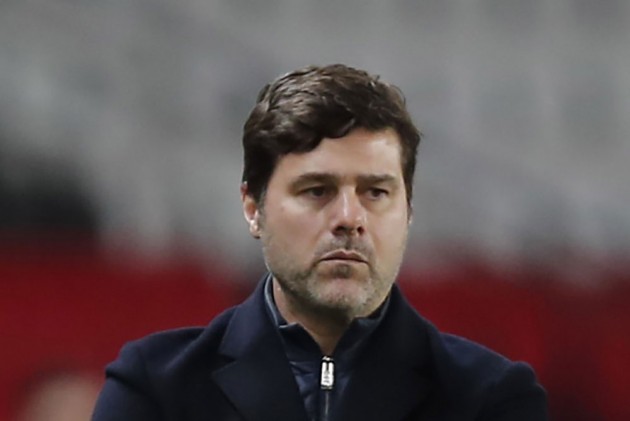 Mauricio Pochettino believes Paris Saint-Germain will be worthy Ligue 1 champions if they leapfrog Lille on the season's final day – and said it would not be a "failure" to fall short. (More Football News)

The head coach, who took over from Thomas Tuchel in January, has seen his team show inconsistent league form, suffering defeats to Lorient, Nantes, Monaco and Lille.

A late-season surge has seen PSG close to just one point behind Lille going into Sunday's final round of games.

The Coupe de France final triumph over Monaco on Wednesday means Pochettino's team already have one major trophy, but the former Tottenham boss wants a double.

"In football you always have to believe. That is the principle we have always had," said Pochettino.

His team travel to relegation-threatened Brest on Sunday evening, while Lille head to Angers, who are safe from the threat of the drop.

"We always think anything can happen and we have to be ready to win in case Lille slip up at Angers which means we will win the league," Pochettino said.

"We believe that good things will happen. Everyone will do their job as well as they can. So we hope to win tomorrow and to also win the title.

Asked whether it might be considered a failure if the Parisians fail to win the title, Pochettino dismissed the emotive term.

PSG have been champions in seven of the last eight seasons, and their budget far exceeds that of any domestic rival.

"At a club like PSG, not winning any of those competitions is always a big disappointment," Pochettino said.

"I don't know if the word failure applies because that has a very strong connotation, but it would be a disappointment rather than a failure.

"It would be disappointing not to win the league, but we are thinking positively and that it may be possible."

PSG also won the Trophee des Champions under Pochettino's watch – beating Marseille in January – having earned their place in that match following a league and cup double last season.

"We hope to win another trophy; it would be our third in five months," Pochettino told reporters in a news conference on Saturday.

"We had a good campaign in the Champions League, reaching the semi-finals, but we were disappointed not to reach the final. I think the squad and players have put in a huge effort to compete in the best way."

This  race just gets better... pic.twitter.com/mrP3YkAbYL

The last time there was such a small gap between the top two entering the final round of a Ligue 1 season was way back in 2001-02, when Lens led Lyon by a point but were overtaken on the final day after losing to their title rivals.

That is one positive omen for PSG, with another being that Brest boss Olivier Dall’Oglio has lost on all six previous occasions when he has faced the capital side as a head coach in the league.

Brest's last league win against PSG was a 3-1 success in January 1985. Indeed, Brest have been beaten in their last three Ligue 1 home games against PSG, but they have never lost four in a row at home against a single opponent in the top-flight.

That may need to change for PSG to stand a chance of a final-day turnaround at the top, although a draw would suffice should Lille lose to Angers.

Pochettino expects to be kept informed about Lille's progress but is urging his players not to be distracted.

"I think it will be difficult not to keep tabs on it," Pochettino said. "The most important thing is that the players are fully focused on what they have to do, which is winning the game, so that if something happens in Angers we will not have a problem ourselves.

"What matters is winning and hoping that something goes our way in the game with Lille."