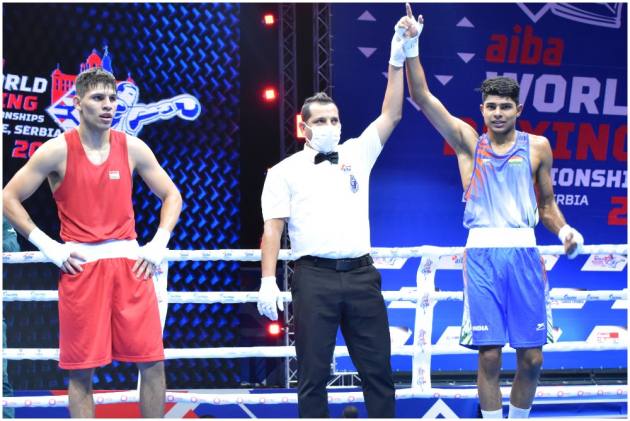 Debutant Nishant Dev (71kg) became the seventh Indian boxer to enter the second round of the Men’s Boxing World Championships with a confident 5-0 triumph over Hungary’s Laszlo Kozak in Belgrade on Wednesday. (Other Sports News)

Dev will next fight Mauritian Merven Clair, who got a bye in the first round, and his victory maintained the unbeaten run of the country's pugilists at the ongoing showpiece. Dev’s win was a perfect start to the day for the country after Sumit (75kg) and Narender Berwal (+92kg) advanced to the second round of their respective categories with fine victories late last night.

Sumit defeated Jamaican Damon O'Neill 5-0 while Narender faced some stiff challenge from Poland's Oskar Safaryan before recording a 4-1 win. Sumit will face Tajikistan's Abdumalik Boltaev in the next round, while Sierra Leone’s Mohamed Kendeh awaits Berwal.

Four others, including Asian medal winners Shiva Thapa (63.5kg) and Deepak Bohria (51kg), had made the second round of their categories earlier in the tournament. Later this evening, Varinder Singh will take on Karen Tonakanyan of Armenia in his 60kg opening bout.

Govind Sahani (48kg) and Lakshya Chahar (86kg) are the other two Indians who will be seen in action Wednesday night. Chahar will face Korea’s Kim Hyeonkyu. Sahani, on the other hand, will fight it out against Ecuador's Billy Arias in a round of 32 contest. All three are making their debuts at the global showpiece.

With more than 600 boxers from over 100 countries in fray, a lot of competitors will have to win at least three bouts in some categories to get to the quarterfinal stage. The gold winners at the showpiece will walk away with a prize money of USD 100,000.