One of the title favourites, India were slow to get off the blocks as they were stunned 4-5 by France before they got their acts together and thrashed Canada 13-1 and Poland 8-2 to finish second in Pool B and qualify for the knockout round. 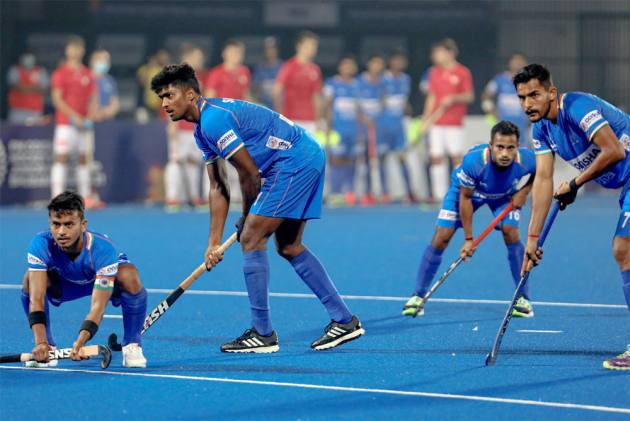 Their mojo back after two resounding wins, defending champions India would bank on their attacking instinct and drag-flicking prowess to outwit European giants Belgium in the quarterfinal of the FIH Men's Junior Hockey World Cup in Bhubaneswar on Wednesday. (More Hockey News)

One of the title favourites, India were slow to get off the blocks as they were stunned 4-5 by France before they got their acts together and thrashed Canada 13-1 and Poland 8-2 to finish second in Pool B and qualify for the knockout round.

But from here on, the Indians need to play their hearts out if they want to win the title for the third time.

The quarterfinal against Belgium will be a re-match of last edition's final where India beat the European side 2-1 to claim the title under Harendra Singh in Lukcnow in 2016.

Uttam and Maninder, in particular, have been brilliant inside the opponents' circle.

To add to India's strength is the presence of penalty corner options in vice-captain Sanjay Kumar, Hundal, Shardanand Tiwari and Abhishek Lakra, and all of whom have scored in the tournament so far.

Sanjay, in particular, has been in ominous form with set pieces and have registered back-to-back hat-tricks against France and Canada, while Hundal also scored three goals against Poland.

The midfield is in safe hands of skipper Vivek Sagar Prasad, who already has the experience of playing top-level hockey having been part of India's historic bronze medal-winning campaign at the Tokyo Olympics.

The backline, however, remains a concern and the likes of Sanjay, Tiwari, Lakra and Yashdeep Siwach will have to be on their toes to keep the Belgians at bay.

India's chief coach Graham Reid, who is in charge of the junior side for this tournament, sounded confident ahead of the crucial tie.

"The players had a look at them (Belgium) and we are very confident. Hopefully, we can go and get a win," said the Australian, who guided India to the Tokyo Olympics bronze.

"Belgium is a very good team and we will try to do our best against them," he said.

Belgium have never won the Junior World Cup and pressure would be high on them to replicate the success of their senior team, which is the reigning Olympic as well world champions.

In the other quarterfinals of the day, Germany will play Spain, Netherlands will take on Argentina and France will square off against Malaysia.