Lionel Messi now has 700 goals for club and country - out of that incredible haul for Argentina and Barcelona, these 10 stand out 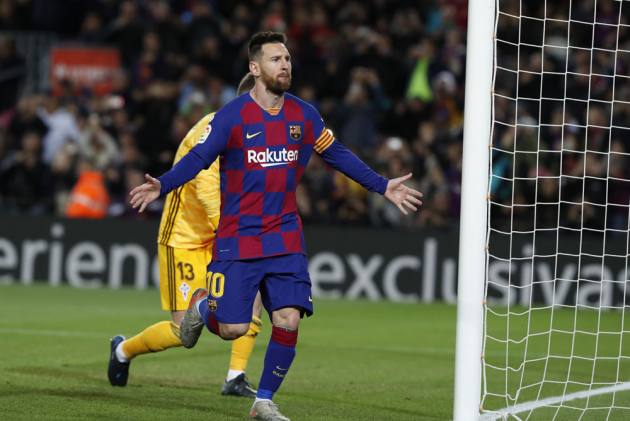 The Barcelona and Argentina star has been the scourge of defenders in Spain and across the globe since making his debut professional debut at 17 and his career has now yielded another incredible landmark.

In the process, the forward has collected 34 club trophies and a record six Ballons d'Or, but international honours have eluded him since he won gold at the 2008 Olympics.

To celebrate Messi's latest century, we take a look at 10 of his very best and most important goals.

Even at 17, Messi had the confidence of a veteran. Having already had one goal wrongly ruled out for offside - an audacious chip from the edge of the box - Messi's confidence was far from knocked and just a minute later he latched onto Ronaldinho's pass before lobbing the ball over Albacete stopper Raul Valbuena from 16 yards. Some way to open your account for a club.

In the 12 years since he first got on the scoresheet, only one of Messi's strikes was ever going to top this list: his Diego Maradona-esque solo goal against Getafe. Messi picked up the ball in his own half and danced around two players before turning on the pace, beating two more defenders and going around the goalkeeper, capping it with a right-footed finish.

Described by some as 'a defining goal' in his career, Messi's strike against Real Zaragoza seemed to take him from very good into another class entirely. Messi displayed all he had to offer in this goal, which began when he won the ball from a tackle on halfway. From there, he shrugged off one challenge, raced towards the box and turned a defender inside out before drilling the ball into the far corner - leaving Pep Guardiola speechless.

This was the height of one of the fiercest Clasico rivalries in decades, as Jose Mourinho's Real Madrid waged war on Guardiola's Barca. They met four times in three competitions in less than a month, including in the Champions League semi-finals, when Messi faced pretty brutal treatment as Madrid tried to shackle him. He scored twice in a 2-0 first-leg win at the Santiago Bernabeu but it is the first goal people remember: the tension of the match, the bitterness of the rivalry, the ducking, weaving slalom through the defence and the composed finish past Casillas, all from the most nonchalant Sergio Busquets assist you will ever see.

Prior to the 2014 World Cup, Messi had only scored one goal in eight appearances. Seemingly determined to step up for Argentina, he netted in his side's opening match before going on to score one of the goals of the tournament in the second against Iran. With the score at 0-0 heading into stoppage time, Messi took control of the ball and bent a powerful strike past the despairing arms of Alireza Haghighi to break Iranian hearts.

This time last year, Lionel Messi cuts inside against Iran at the #WorldCup ... http://t.co/anAb31sw9L pic.twitter.com/bO9xKykPyD

Having already opened the scoring three minutes earlier to give Barca a 1-0 advantage over Bayern Munich in the Champions League semi-final, Messi doubled his tally with a sumptuous effort. Ivan Rakitic's pass sent Messi on his way, before the little maestro's trickery put Jerome Boateng on his backside and allowed the Argentine to casually lift the ball over the onrushing Manuel Neuer.

The second part of a treble-winning season for Barca came in the form of the Copa Del Rey against Athletic Bilbao. With 20 minutes gone and the score deadlocked, Messi set off on a marauding run down the right wing and soon found himself trapped amongst three defenders. Naturally, Messi was able to float past the trio as if they weren't there, before cutting into the box and beating Iago Herrerin at his near post.

GAL MORNING!!!
It's 2 years today since this treasure from Leo #Messi pic.twitter.com/Cv3dF8iINo

El Clasico rarely disappoints for football fans around the globe, and this edition was no different. Anything but a win would essentially hand Real Madrid the title, and it looked to be headed for a 2-2 draw until Sergi Roberto's swashbuckling run in the 92nd minute gave Jordi Alba the chance to square it to Messi, who finished with aplomb from the edge of the area for his 500th Barcelona goal.

Romario Ibarra's first-minute goal in the last match of CONMEBOL qualification left football fans across the globe staring at the prospect of the unthinkable – a World Cup without Messi. Enter the man himself, who dragged Argentina out of a bumbling stupor to single-handedly tear Ecuador apart with a sensational hat-trick. The shift of pace and stunning, dipping finish into the top corner to claim the matchball was the best of the bunch and a grateful bench spilled on to the field to mob their hero.

Messi has never won the FIFA Puskas Award for the best goal of the year, although he has twice come second, most recently for this effort against Real Betis in a 4-1 win last season. He sent the ball left to Ivan Rakitic and hurried to the edge of the box for the return ball, then - having shaped for a powerful strike towards the near post - chipped a sublime effort into the far corner beyond the despairing Pau Lopez. The goal completed his hat-trick and earned an ovation from the home fans but was not enough to beat Debrecen's Daniel Zsori to the Puskas prize.