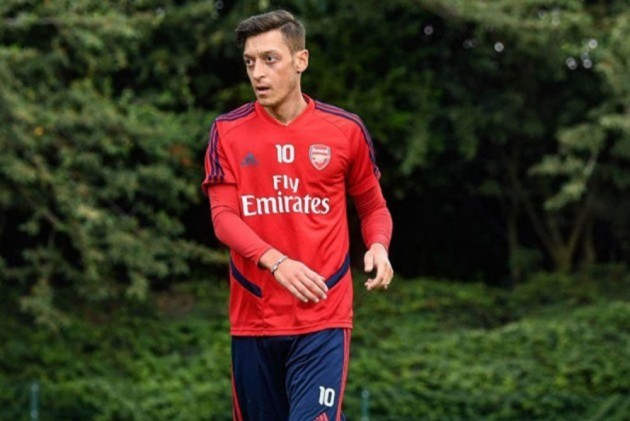 Mesut Ozil could go from being an Arsenal first-team outcast to captain of the side that takes on Premier League leaders Liverpool on Wednesday. (More Football News)

Manager Unai Emery revealed German midfielder Ozil is in contention to lead out the Gunners for the EFL Cup match at Anfield after crunch talks to determine his commitment.

The 31-year-old has made just two appearances this season, starting the Premier League draw at Watford and the EFL Cup win against Nottingham Forest in September.

Ozil has been linked with a move away from Emirates Stadium; however, he is reportedly the highest-earning player at the club, and cannot join another club until January.

Talks between manager and player on Tuesday appear to have been fruitful, according to Emery.

"He's in the group so he has a chance to play," said Emery. "We have had this morning a very good conversation, Mesut and me, and I said to him I haven't changed my idea about him.

"He knows what I want from him because it's the same as last season in the first day of pre-season training when we had a conversation. It's the same as one month ago and in that way, some circumstances weren't helping us in every moment to be consistent or available to play.

"But I will say I think the last weeks he has progressively been training well and adding his spirit to help us.

"For example, our conversation this morning was because I wanted to listen to him about how he's thinking now to help us and be with us tomorrow. Then if we are in the same spirit and the same idea, to play. It was a very good conversation and tomorrow he’s in the group."

Asked whether Ozil could be the captain of the team to take on Jurgen Klopp's Reds, given Granit Xhaka will be rested, Emery said: "It depends. He could be, yes."