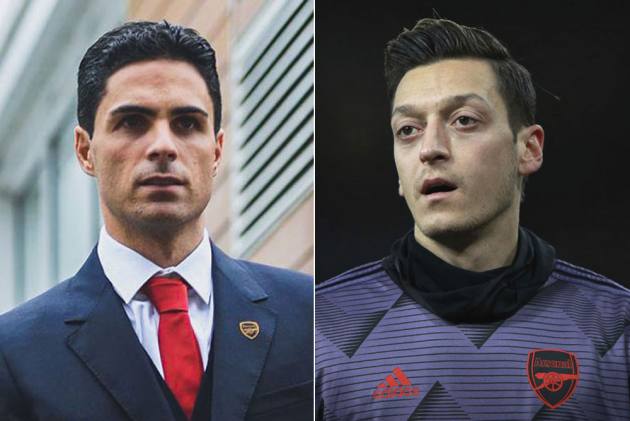 Mesut Ozil has gone from "world class" to cattle class at Arsenal, with his omission from Mikel Arteta's Europa League squad showing how far his star has fallen. (More Football News)

The German playmaker, now 31, joined in a then club-record deal from Real Madrid seven years ago, with Arsene Wenger saying Ozil possessed "all the attributes I look for in an Arsenal player".

The chief executive at the time, Ivan Gazidis, spoke of Ozil being "a world-class player who is one of Europe's brightest young talents".

Yet in those seven years since Ozil arrived in London, he has changed from being an automatic pick to a player the club look to have written off.

The Opta data is damning and shows that Ozil, whose contract expires in 2021, no longer exerts anything like a significant influence on the Gunners team when he plays.

7 years ago I joined the @Arsenal family and Mon. Wenger â¤ï¸ðð¼ And I would not hesitate to do it all over again. #anniversary #YaGunnersYa #M1Ö

Ozil arrived as an established star of the game, a player who was named in the Euro 2012 team of the tournament and one who could hold his own in the Real Madrid midfield.

At around £42.5million, he was a costly investment for Arsenal, but it felt like a statement signing, with Wenger deciding his team needed an injection of world-beating midfield enterprise.

He sparkled fleetingly during his first two seasons, either side of winning the 2014 World Cup with Germany, but then had a stellar 2015-16, having 19 assists and creating 28 'big chances' in 35 Premier League games that term, drastic improvements on his previous modest returns.

Only Thierry Henry and Kevin De Bruyne have had more assists in a Premier League season, with 20 each in 2002-03 and 2019-20 respectively.

Those numbers pointed to Ozil fulfilling the expectations Arsenal had of him, and Wenger's team finished second in the Premier League in that campaign. Ozil was the club's player of the season.

Yet it has been a case of diminishing returns ever since, with dips to nine and then eight assists in 2016-17 and 2017-18, and big chances created sliding to nine and 13 across those same terms.

Ozil signed a big-money new contract in early 2018, reportedly worth £350,000 a week, and his form since has nosedived. Two assists in 24 Premier League games in 2018-19 were followed by just two again last term, when Ozil played 18 matches in the top flight.

Arteta has not used Ozil yet this season, and it must be doubtful whether he will play for Arsenal again.

It came as no surprise when Arteta left Ozil sidelined for Arsenal's Europa League group campaign on Thursday, revealing a 24-player squad without the German's name.

Ozil has enjoyed some special moments with Arsenal in Europe, such as the Champions League hat-trick he scored against Ludogorets in October 2016, and he played a role in the Gunners reaching the 2018-19 Europa League final.

He played 10 games during that Europa League run but scored just once and had only a single assist, with a paltry 25 touches in the opposition penalty area during 652 minutes on the pitch.

In the 4-1 drubbing by Chelsea in the final, Ozil was again a lightweight presence, booed off as he was substituted in the second half and criticised by former Arsenal midfielder Cesc Fabregas.

Arsenal, once Champions League regulars, have become Europa League mainstays during Ozil's time at the club.

Now, for all his unmistakable talent, Ozil cannot convince his manager he should be playing even at Europa League level.

In a week which saw him offer to pay to keep the man inside Arsenal mascot Gunnersaurus in work, Ozil's Arsenal career looks as extinct as the T-Rex.