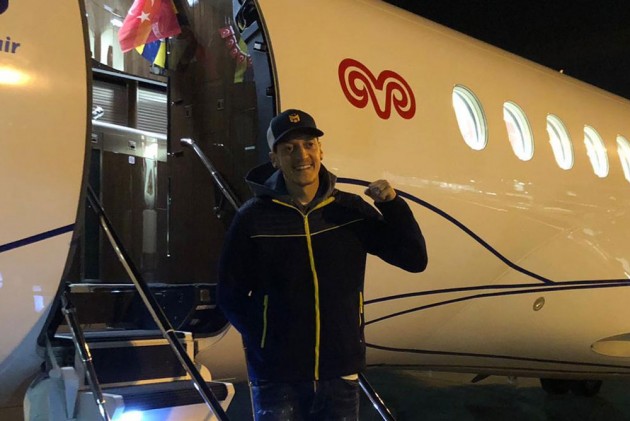 Mesut Ozil must have enormous hunger to play football again but can flourish in the "warm environment" he will receive at Fenerbahce, says former Arsenal boss Arsene Wenger. (More Football News)

World Cup winner Ozil is edging ever closer to a move to the Super Lig giants, bringing an end to a seven-and-a-half-year stay with the Gunners.

The former Germany international has not featured for Arsenal since March after being frozen out by boss Mikel Arteta and was not included in their Premier League or Europa League squads for this season.

Wenger was the man to bring Ozil to Emirates Stadium from Real Madrid in 2013 but the attacking midfielder fell out of favour under both Unai Emery and Arteta.

The legendary former Gunners manager is convinced of Ozil's enduring quality ahead of his switch.

"I'm sure that he's frustrated at not having played. His hunger must be absolutely [enormous] to play football again," Wenger told beIN SPORTS, the global sports broadcaster.

"Mesut is a guy who needs a warm environment and I believe he will find that more than anywhere else in Turkey. Overall, he can provide the balls that the strikers need to win football games. If they do that well, they have a good chance of winning the league.

Under Wenger, Ozil was a three-time FA Cup winner and an influential member of the first-team squad.

"Mesut is like if you imagine an orchestra in music. He's a guy who plays the ball at the right time," he added.

"The timing of his pass is exceptional, but the creativity of his pass is as well. In every situation he confronts, he gives the right answer and that is genius.

"I must say he can provide the assists, the key pass. I remember he was the first one, the quickest one to break the number of assists in the Premier League. In 2015-16 he had 19 assists in the league. That is absolutely amazing.

Wenger believes Ozil may need some time to hit top form due to the fact he has been out of favour for so long.

"There are two things that are very important in the quality of your performance. First of all your basic fitness, you can get your basic fitness if you work well in training and if you practice well," he said.

"Personally, at the moment I don't know what kind of shape he's in. The second part is competitive fitness and that is linked with the number of games you play. On that front, he has a handicap.

"If his basic fitness in training is good, it will only take him three or four games to be at his best.

"The quality that he has is … vision in depth. He sees quickly, he decides quickly and he realises quickly what he sees. That is a quality you don't find too often in our game."

Whether I am here or not I will always support my Gunners Good luck tonight! #YaGunnersYa #COYG #ARSNEW

Ozil is of Turkish descent and Wenger spoke about his former player's aspirations to feature for Fenerbahce.

"I could always feel a strong Turkish link. I met the family. I met his father when I signed him and you could see there is a strong attachment to Turkey and a big interest in the Turkish league," he said.

"Fenerbahce is a big club. I know Fenerbahce quite well because I know the chairman Ali Koc and I played a few times against Fenerbahce in the Champions League.

"There is a huge fan base there and they must be absolutely excited to have a player like Mesut Ozil playing for their club."