Mesut Ozil and Sead Kolasinac, victims of an apparent attempted carjacking last month, are back training with Arsenal after being given time off and Unai Emery may use them against Burnley 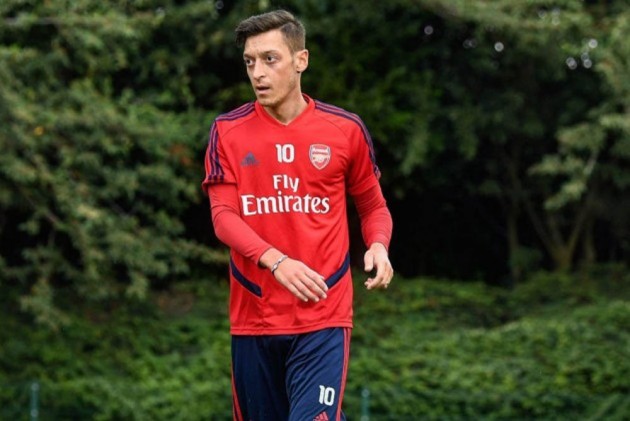 Arsenal head coach Unai Emery is "100 per cent confident" Mesut Ozil and Sead Kolasinac are mentally ready to return to action after being given time off due to concerns over their safety. (Football News)

Ozil and Kolasinac were victims of an apparent attempted carjacking last month and missed the 1-0 win at Newcastle United on the opening weekend of the Premier League season, but they returned to training on Tuesday.

Footage of the incident showed Kolasinac confronting and scaring off two masked attackers who approached a vehicle driven by Ozil.

The duo featured in the 2-1 pre-season friendly defeat to Barcelona on August 4, but they were then ruled out indefinitely for "further security reasons".

However, both players are back in contention to play against Burnley on Saturday and Emery will make a late decision on whether to use them. Ozil may miss out through illness.

"They came back training with us on Tuesday. Mesut is a little sick so he couldn't train yesterday," Emery said at Thursday's pre-match news conference.

"Each training session gives us good information, different options with them. Am I pleased to have them back? Of course.

"If they are training consistently each day with normal work I am going to decide and achieve the best solution each moment. It’s positive they are with us now.

"Are they ready? Yes, 100 per cent. Their mentality is focused on us, for training and the match.

"My focus is to be positive and think the players are 100 per cent with their mind here. I want to help them be normal with us, training, thinking and above all taking the focus for each match."

Two men were last week charged with a public order offence in connection with an incident outside Ozil's home, separate to the attempted carjacking. The two men were reportedly involved in an altercation with security staff.