Michael Holding Has A 'Problem' With Jasprit Bumrah, And Indian Pacer Should Listen To Windies Great

Clearly impressed with Jasprit Bumrah, Michael Holding gave a word of advice to the Indian pacer: "It's a human body and not a machine" 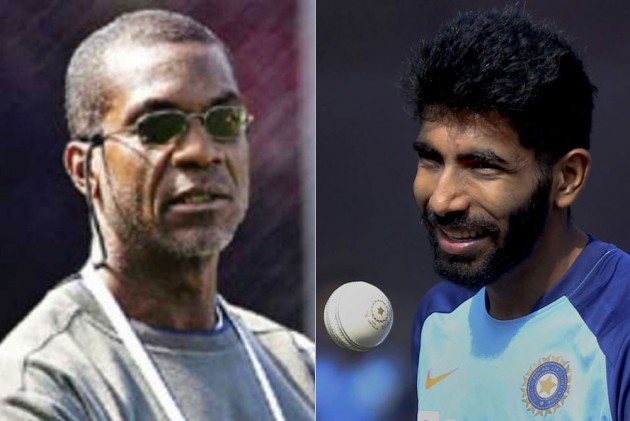 Legendary West Indies cricketer Michael Holding has warned Indian bowler Jasprit Bumrah to take care of his body, saying "it's a human body and not a machine." (More Cricket News)

Giving a word of advice to the Indian pacer, Holding said "My problem with Bumrah is... and I mentioned it to him the last time I saw him in England... is how long that body is going to hold up with that short run-up and the effort he has to put in his bowling. It's a human body and not a machine."

Holding is clearly impressed with Bumrah and spoke about the Indian pacer's ability to hit the deck hard which makes him a difficult proposition for the batsmen to face across formats.

"Jasprit (Bumrah) is a little bit quicker, he hits the deck hard. People always talk about bowlers who hit the deck and bowlers who skid the ball off the surface," Holding said on Sony Ten Pit Stop show in a video uploaded on their Facebook page.

"Malcolm Marshall for instance... a great fast-bowler who used to skid the ball off the surface. Bumrah hits the deck hard and that creates more problems. Especially on that short ball which put questions in the batsmen's minds that the pace with which the ball is coming towards you with that short run-up.

"It is going to be difficult. The natural inclination for any bowler, once he gets that ball in his hands is to apply saliva or apply sweat and then put it on the ball, that's natural," Holding said.

Meanwhile, Bumrah has emerged as the top contender for BCCI's nomination for the prestigious Arjuna Award.

The BCCI office-bearers are expected to zero in on nominations for the men's and women's categories later this month but the Gujarat pacer's stupendous performance in the last four years makes him the most worthy candidate.

If BCCI decides to send multiple names in the men's category, senior opener Shikhar Dhawan could also be preferred as he missed out in 2018 despite the Board sending his nomination.

Bumrah lost out as he had completed only two years in international cricket while the criteria of selection requires performance of at least three years at the highest level.

"That's why Bumrah, who completed three years of international cricket last year, missed out to Jadeja, who is senior as well as a consistent performer for many years," the source added.

Holding also expressed concerns regarding different methods being mooted to do away with the use of saliva on cricket balls during matches. In the wake of coronavirus pandemic, the International Cricket Council (ICC) is looking to stop players from using saliva to shine the ball.

Earlier, in a report published in Sydney Morning Herald, Australian ball manufacturer Kookaburra were said to be working on a compound that would help bowlers avoid becoming disadvantaged in a post-coronavirus context and it will be ready to use within a month.

"I'm hearing talks about producing some sort of polish that the umpires will take, will keep and you shine the ball in front of the umpire. I am not too sure on how that's going to work," Holding said.

"It is going to be a different world and as far as I am concerned it will be a logical nightmare to keep all those things in place."