Lautaro Martinez scored twice and Romelu Lukaku was also on target as Inter overpowered rivals Milan 3-0, putting them four points at the top of Serie A 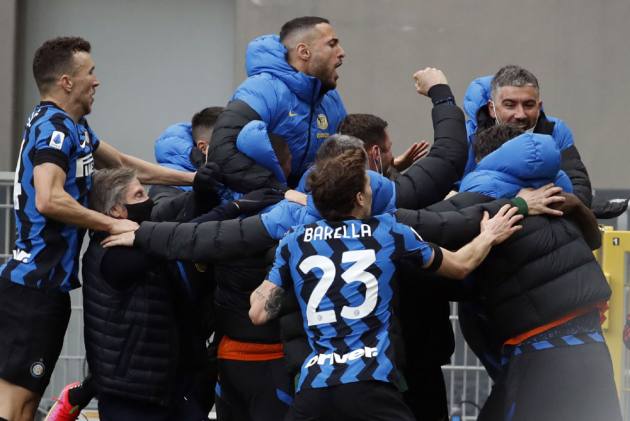 Inter moved four points clear at the Serie A summit thanks to a resounding 3-0 derby triumph over faltering rivals Milan on Sunday. (More Football News)

Lautaro Martinez scored twice and Romelu Lukaku was also on target, helping Antonio Conte's in-form side make it five wins in their past six league outings to take a firm grip on the title race in Italy.

This was the first time since April 2011 that the city rivals had met when occupying the top two positions in the table, with that season finishing with Milan crowned as champions.

A repeat for the Rossoneri looks increasingly unlikely as their worrying dip in form continued, though they were somewhat unfortunate to come up against a goalkeeper in supreme form.

Samir Handanovic twice repelled Zlatan Ibrahimovic in quick succession early in the second half before Martinez's second goal of the contest, with Lukaku then putting an emphatic seal on the victory in the 66th minute.

4 - Prior to Romelu Lukaku, the last Inter player to score in four consecutive Milan derbies in Serie A was Benito Lorenzi, in 1950. Poison.#MilanInter #DerbyMilano pic.twitter.com/mAE9AoTBFp

However, it was Martinez who had crucially headed Inter in front inside five minutes. Lukaku initially saw his attempted low cross blocked, but a second, floated delivery picked out his team-mate to head past Gianluigi Donnarumma, making his 200th Serie A appearance.

Milan were grateful Lukaku did not take a glorious opportunity before the break, the Belgian striker failing to apply the finishing touch to Ivan Perisic's inviting cross as he missed the ball completely.

Stefano Pioli's team started the second half with a flurry of opportunities; Handanovic spectacularly turned away an Ibrahimovic header at a corner before producing a point-blank block to again deny the Swede when the ball came back into the penalty area.

Inter's captain also pushed a rising drive from Sandro Tonali over the crossbar, maintaining a lead they soon doubled when a clinical counter-attacking move allowed Perisic to pick out Martinez, who fired in with his left foot.

Lukaku put the game well beyond Milan with a fine solo effort, finishing a powerful run from deep in Milan's half with a low shot that flashed beyond Donnarumma. In doing so, he became the first Inter player to score in four successive Serie A derbies since 1950.

What does it mean? Conte has Inter on course

Having missed out on the title in Conte's first season in charge, Inter are now the clear favourites to end Juventus' dominance and be crowned champions for the first time since 2010.

In contrast, long-time leaders Milan are faltering. Having been unbeaten in the league prior to the mid-season break, they have now lost four times in 2021.

While their rivals can focus fully on Serie A, the Rossoneri had little time to recover for this game following a tough trip to Belgrade in midweek. Considering their season started early for Europa League qualifying, Pioli's squad are showing signs they may be running out of steam.

Handy man to have in goal

The final scoreline was lopsided, yet it could have been so different without the excellence of Handanovic. The keeper came out on top in his personal duel with Ibrahimovic, who hit the target with all five of his attempts yet was still unable to score against his old club.

Lukaku now has 17 Serie A goals for the season, putting him one clear of Cristiano Ronaldo as the competition's top scorer. Yet it is far from a one-man show for Inter: Martinez's brace lifted his tally in the league to 13. The forward combination has put their club in pole position to end their wait to win the Scudetto once more.

- Inter have won the Derby della Madonnina by a three-goal margin for the first time since August 2009 with Mourinho.
- Martinez's goal after four minutes and 31 seconds was the earliest Milan have conceded in Serie A this season.
- Martinez is the second-youngest foreigner to score multiple goals in a league Milan derby for Inter (23 years, 183 days) - bettered only by Lennart Skoglund.
- Inter have scored 57 league goals in the first 23 games of this season - they had more only in 1949-50 and in 1950-51.

Both teams have fixtures at San Siro coming up. Inter will be the home team again when Genoa visit next Sunday. Before then, however, Milan host Red Star Belgrade in the second leg of the last-32 tie on Thursday, followed by a tricky trip to Roma three days later.