Brahim Diaz, Rafael Leao and Diogo Dalot were on target as Milan made it two wins from two in this season's Europa League. 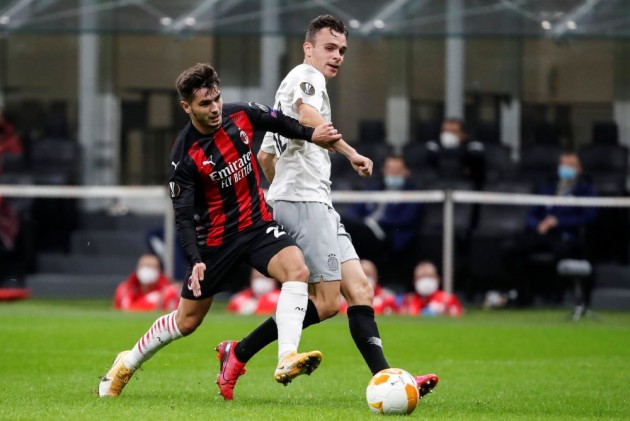 Milan did not not let Zlatan Ibrahimovic's penalty miss derail them as they cruised to a 3-0 win over Sparta Prague in their Europa League Group H match on Thursday.

Stefano Pioli’s side – who beat Celtic 3-1 in their group opener last week – were sharp from the outset and went ahead after 24 minutes courtesy of Brahim Diaz's smart finish.

Milan talisman Ibrahimovic struck the crossbar from 12 yards nine minutes before the interval, but his half-time replacement Rafael Leao doubled the Rossoneri's advantage in the 57th minute.

On-loan Manchester United defender Diogo Dalot then scored his first goal for the club as Milan wrapped up all three points at a canter.

Which Milan goalscorer has the most talent? #UEL

The Swede then played a pivotal role in Milan's opener after 24 minutes, sliding the ball across goal for Diaz – who had started the move by stealing possession on the halfway line – to cut inside and fire underneath Milan Heca for his third goal of the season.

Heca raced off his line to deny Rade Krunic moments later before Ibrahimovic wasted a golden opportunity to extend Milan's lead, clipping his spot-kick against the crossbar after he had been pulled back inside the area by David Lischka.

Ibrahimovic was replaced at half-time by Leao, who was denied four minutes into the second period by Heca after being played through by Sandro Tonali.

Leao got the better of the Sparta goalkeeper shortly before the hour mark, though, stroking home from close range following Dalot's sumptuous low ball across the penalty area with the outside of his foot.

Dalot added a third in the 66th minute with a deflected strike from 20 yards that crept inside Heca's right-hand post to seal Milan's routine victory.

What does it mean? Imperious Milan march on

Milan are a team reborn this season. This latest victory means they have scored two or more goals in 12 consecutive games across all competitions for the first time since Serie A started in 1929-30.

They have now won nine of their 10 games in all competitions this season, with this latest triumph moving them onto six points at the summit of Group H – two ahead of second-place Lille.

Dalot in the thick of it

Dalot's face clearly did not fit at Old Trafford under Ole Gunnar Solskjaer but he looks to be at home in his new surroundings.

The Portuguese created Leao's goal with a fine cross, opened his account for Milan soon after and made three interceptions – a joint team high.

Ibrahimovic endures a mixed half

He was only on the pitch for 45 minutes but Ibrahimovic certainly left his mark on the game.

He had three shots, made two key passes – one of which was the assist for Diaz's opener – but his contribution will be remembered for a third penalty miss from his last five for the club.

Milan will hope to strengthen their position at the top of Serie A when they visit Udinese on Sunday, while Sparta do not play again until they travel to Celtic in Group H next Thursday.