India's left-handed Prajnesh Gunneswaran, who made his maiden appearance at the Wimbledon, had his chances but unforced errors put paid to his hopes, against Milos Raonic. 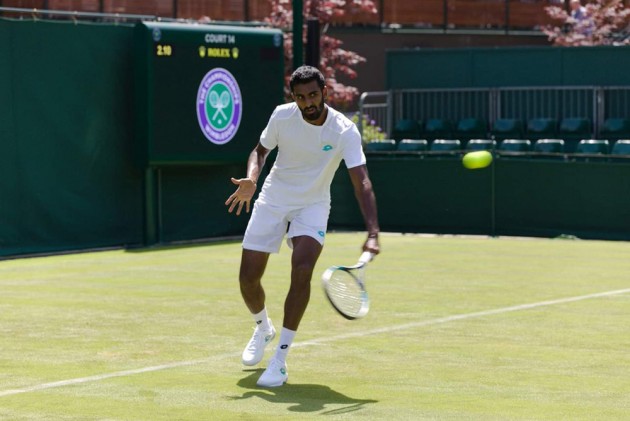 India's top singles player Prajnesh Gunneswaran Monday crashed out of the Wimbledon Championships after going down in straight sets to world number 17 Milos Raonic of Canada.

The 29-year-old Indian, ranked 94 in the world, lost 6-7 (1) 4-6 2-6 to 15th seed Raonic. It was Prajnesh's third first round exit after losing in the opening round at both Australian Open and French Open.

The Left-handed Prajnesh, who made his maiden appearance at the Wimbledon, had his chances but unforced errors put paid to his hopes.

He fought really hard in the opening set. He seemed solid on serve for six games but dropped the first set in the tiebreak. The experienced Raonic converted the first of five set points to take it 7-6(1) in 42 minutes.

The match didn't reach this intensity after the opening set as Raonic walked away with it to enter the second round.

Prajnesh was the only Indian in the singles main draw after Ramkumar Ramanathan and Ankita Raina bowed out after losing their respective second round qualifying matches. Saketh Myneni had lost in the first round of the qualifiers.