Sneh Rana and Taniya Bhatia were at the crease having added 108 runs for the ninth wicket when umpires called off play due to bad light, last week. 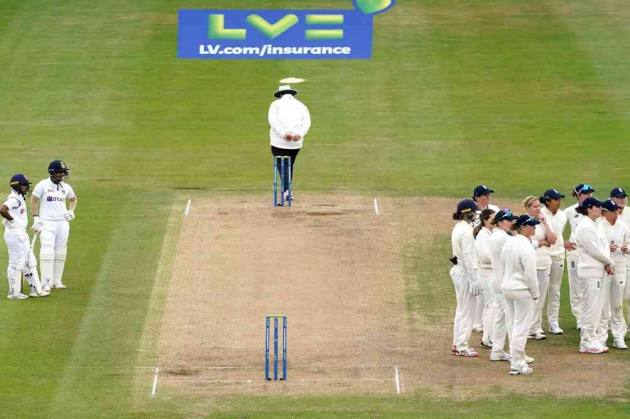 Indian women's team skipper Mithali Raj on Saturday said she was taken aback when the umpires took off the bails to abruptly end their one-off Test against England even though her teammates in the middle wanted to continue batting. One-off Test Highlights | More Cricket News)

Debutants Sneh Rana and Taniya Bhatia, who had raised a match-saving 108-run partnership for the ninth wicket on the final day, were at the crease when umpires called off play due to bad light, last week.

Rana was unbeaten on 80 at that time and had a good chance to get a century on debut but was denied the opportunity despite the Indians conveying to the rival skipper Heather Knight that the batter wanted to continue playing.

"We wanted to continue, that's what we informed the opposing captain. I was also on the backfoot when I saw bails were taken off. Sneh Rana said bad light call was taken by the umpire. That's what we were told," Raj said during a virtual press conference.

"But then both the teams were congratulating each other. It is pretty much taken that the match is over.That's what I was told by Sneh Rana."

England had enforced a follow-on on the visitors after they folded for 231 while chasing hosts first innings total of 396 for nine declared.

The Indians put up a much better show in their second effort and forced a draw, ending at 344 for eight.

Deepti Sharma scored a 168-ball 54 in the top-order while Rana, batting at number eight, top-scored with an unbeaten 80 off 154 balls to frustrate the England bowlers.