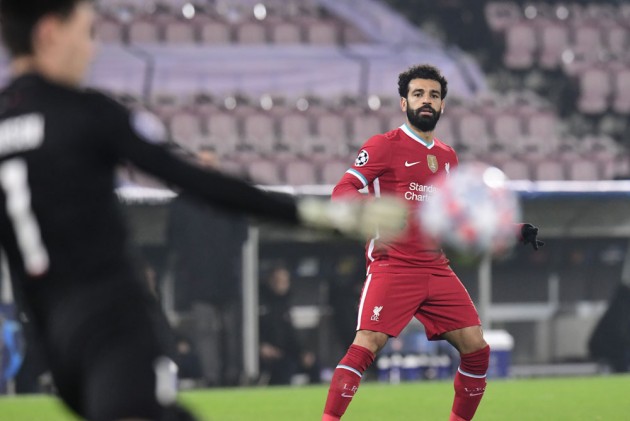 Mohamed Salah is aiming to "make the gap bigger" between himself and Steven Gerrard after the Egyptian overtook the Liverpool legend as the Reds' Champions League record goalscorer. (More Football News)

Salah netted his 22nd goal in the competition – excluding qualifiers – for Liverpool in the opening minute of Wednesday's clash with Midtjylland.

It saw him surpass Gerrard's record of 21, with the former Liverpool captain having won the Champions League in 2004-05.

Liverpool's opener was also the quickest strike in their Champions League history, with Salah having intercepted a loose back-pass to prod home after just 55 seconds.

Midtjylland fought back to draw 1-1 in contentious fashion, with the Danish side scoring from a penalty awarded after a long VAR check.

Alexander Scholz converted the spot-kick and thought he had scored a second when he finished from an acute angle, only for VAR to rule it out, with the technology then disallowing Takumi Minamino a winner at the other end.

Speaking to BT Sport at full-time, Salah was delighted to have cemented his name in Liverpool's record books, but is now looking to put distance between himself and the others on the list.

"It's a great feeling to be the top scorer for the club, it's something I'm proud of," said the 28-year-old.

"I need to keep going with that, score more goals, make the gap bigger between me and the others! I'm trying all the time to score goals to help the team to win games.

"One of the most important goals. They played good, almost man-marked us. We scored the goal early, but they strike back, they played a good game.

"The most important thing is to qualify, it's a game to learn [from]."

Salah's first goal for Liverpool in the Champions League proper came in a 2-2 draw with Sevilla on September 13, 2017. He followed that up with a further nine goals, taking his tally to 10 for the campaign from 13 appearances, while he provided four assists.

The former Roma star, who went off injured as Liverpool lost 3-1 to Real Madrid in the final, crafted 29 chances for team-mates, while converting 70 per cent of the big opportunities he was presented with, as per Opta data, averaging a goal every 92 minutes 54 seconds, and his maiden Champions League campaign with Liverpool remains his best on an individual level.

Salah's output in Europe dropped off slightly in 2018-19, as Liverpool went on to win their sixth European Cup. He scored five goals and set up an additional two from 12 appearances.

All five of his strikes were from inside the area, with two of them from the penalty spot – including the opener in the final against Tottenham.

Liverpool's defence of their title was ended in March, when they slipped out at home to Atletico Madrid in the last 16, just before football across Europe was postponed due to the coronavirus pandemic.

Salah started in all eight of Liverpool's games and was subbed off only twice, clocking up a total of 731 minutes, while his four goals were shared equally between his left and right feet, with one coming from outside the box. His big chance conversion rate, so high in his first season, dropped to 30 per cent last term.

Salah's conversion percentage when it comes to good chances has risen to 40 this term, having netted three goals from his six group-stage appearances.

He has created six chances, including one assist, with his strikes all coming from inside the 18-yard box – two with his imperious left foot, and the other with his right. Salah is yet to score for Liverpool with a header in the Champions League.

13 - Liverpool have earned 13 points from their six UEFA Champions League games this season (W4 D1 L1); only in 2008-09 (14) have they earned more in a single group stage in the competition. Accomplished. pic.twitter.com/L78HDptPFN