Mohammad Amir finished with the best bowling figures at this Cricket World Cup to date of 5/30 but Australia beat Pakistan by 41 runs in Taunton to bounce back from their defeat by India. 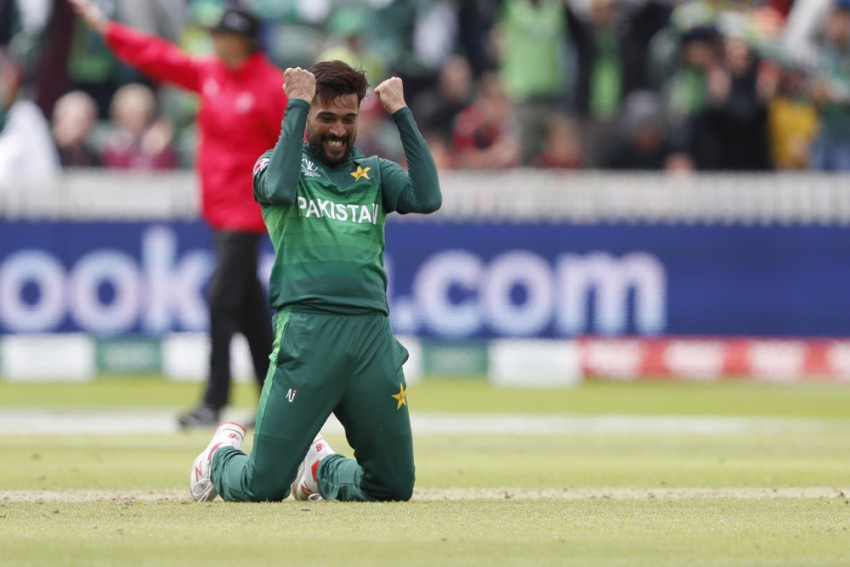 Amir, who has been inconsistent in recent years, claimed career best figures of 5/30, the best of the tournament to date and the best by a Pakistan seamer at a World Cup since Akram’s 5/28 against Namibia in 2003.
AP
Outlook Web Bureau 2019-06-13T09:02:10+05:30 Mohammad Amir, Swinging Times Again For Pakistan Pacer In Cricket World Cup 2019 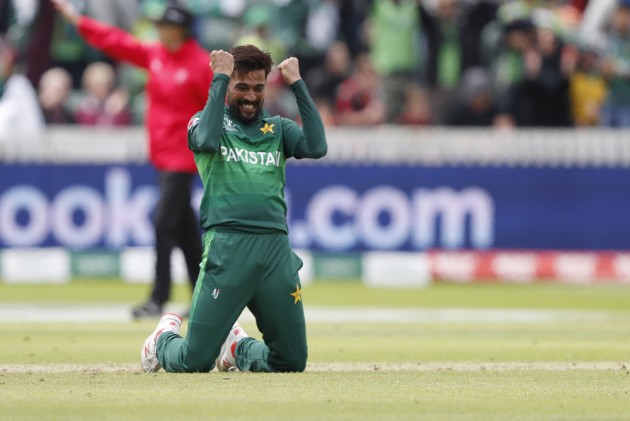 With his hero Wasim Akram watching, a player he would imitate as a child in Changa Bangial, Mohammad Amir produced a spell of hostile fast bowling that would have had the Sultan of Swing tapping a foot in appreciation.

Amir, who has been inconsistent in recent years, claimed career-best figures of 5/30, the best of the tournament to date and the best by a Pakistan seamer at a World Cup since Akram’s 5/28 against Namibia in 2003 - as his clever variation of pace and canny use of swing and seam were the foundation of a performance that while not ultimately match-winning, was certainly eye-catching.

It was the first five-wicket haul of his one-day career, at a ground where he returned to English cricket three years ago after a lengthy and much-publicised spell out of the sport.

No wonder captain Sarfaraz Ahmed was first across to the 27-year old after he claimed the scalp of Mitchell Starc to end Australia’s innings on 307 - a total that was to prove just too big for Pakistan, who slipped to a 41-run defeat at Taunton.

If only Amir’s team-mates had been on the same level, as dropped catches and fielding errors punctuated an Australia innings that started with a flash and flourish, thanks to Aaron Finch and David Warner, but ended in a whimper, the last eight wickets falling for just 84 runs.

He was drafted into Sarfaraz’s side on the eve of the ICC Men’s Cricket World Cup, which many thought was a throw of the dice by a Pakistan team that had been ruthlessly rolled by England in four ODI matches last month.

Pakistan are, of course, a team that is supposedly easy to label, it’s hard to read their name without the predictable preface of ‘unpredictable’.

Lacklustre against the West Indies in their tournament opener, they rebounded to end a winless run of 11 matches with a brilliant victory over favourites England a few days later.

It seems you’re always destined to ride the rollercoaster with these Cornered Tigers and if a team was summed up by one player, then Amir could well be the man.

His combative opening spell had Finch and Warner hoping and weaving and he went for just one boundary in his ten overs, 37 dot balls underlining just how uncomfortable he was to face in the overcast conditions.

Sarfaraz did his best to accentuate the positives of Pakistan’s second defeat in four matches, a loss which leaves them little margin ahead of this weekend’s clash with India.

"We conceded too many runs in the first 20 overs apart from Mohammad Amir. He bowled absolutely brilliantly, as good as I’ve ever seen him bowl, that’s a big positive for us,” he said. “We came back and restricted them well but it was a 270-280 pitch.”

Virat Kohli regards Amir as one of the toughest bowlers to face and it would be hard to argue with the Indian captain on the evidence of this display at Taunton, which took him to the top of the tournament bowling standings.

The problem is you don’t always know what Amir will turn up - and we all know who Kohli would prefer at Old Trafford on Sunday.

In the ICC Champions Trophy two years ago he struggled in the group stages but took out India’s top three batsmen in a match-winning performance in the final.

Then his form dramatically evaporated, failing to pick up a single wicket in last year’s Asian Cup, as his average took a pounding.

His display with the ball with one of the few highlights of Pakistan’s defeat to the West Indies while he removed England danger man Jos Buttler with one of his two wickets at Trent Bridge, spells which showed flashes of the brilliance that always lurks.

But this was the best yet - and be assured Kohli and co. were watching and worrying.