Needing 24 runs from the last 12 balls, Pakistan's Asif Ali hit Karim Janat for four sixes in the penultimate over to seal their side's third consecutive victory in the ongoing T20 World Cup. 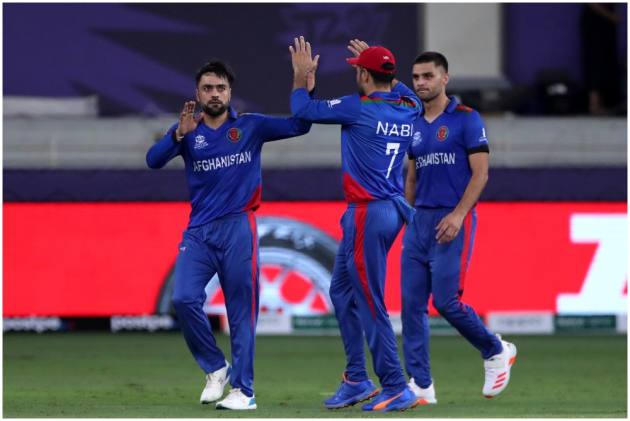 Afghanistan captain Mohammad Nabi has defended his decision of bringing his front-line spinner Rashid Khan into attack after 10 overs against Pakistan on Friday in a T20 World Cup encounter, stating the leggie can restrict the opposition anytime during the game.

Chasing Afghanistan’s 147/6, Pakistan were 72/1 in 10 overs. Nabi brought Rashid in the 11th over with some experts feeling that the latter could have halted the opposition batsmen’s early progress if given the ball a bit earlier.

“I think it’s not too late after ten overs (to bowl Rashid)," said Nabi after Afghanistan lost against Pakistan in a Super 12 clash following Asif Ali’s pyrotechnics with the bat in the penultimate over of the match.

“He bowled really well and he restricted the batsmen quite well, that’s why they needed 24 runs from 12 balls (to win at the end).” Rashid Khan’s 2/26 also helped him become the fastest man to take 100 T20 international wickets in the process as well when he dismissed Pakistan captain Babar Azam for 51.

With a hattrick of wins, Pakistan have almost sealed their spot in the ongoing T20 World Cup semifinals. It leaves four teams – India, New Zealand, Namibia and Afghanistan – fighting for that second semifinal spot from the group.

With three games left, Nabi insisted his side’s morale is still high despite suffering their first defeat in Super 12s. “We have only played two games and we won one (against Scotland) and today was a close game, at the end Pakistan won the game,” said the 36-year-old Nabi.

Nabi, who scored 35 off 32 balls, had shared a 75-run stand with Gulbadin Naib (35 off 25 balls), to give his spinners something to bowl at but faced with Asif’s brutal hitting it proved to not be enough.

“Everybody came full of confidence that we could win the game and we tried our best, we gave 120 percent in the game,” he added. “But it’s part of the game, winning and losing, and Pakistan finished the game well at the end.”