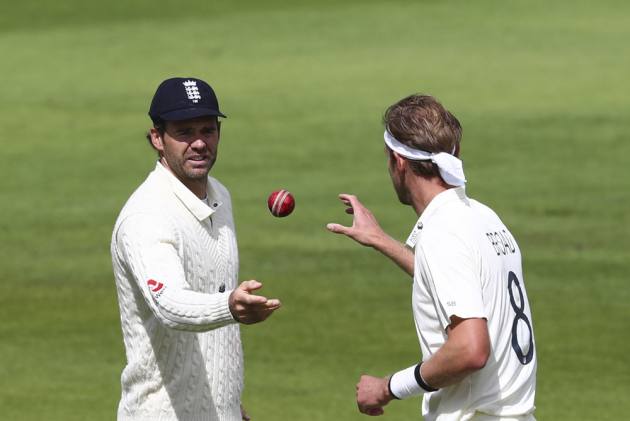 England captain Joe Root feels fortunate to have a "battery of fast bowlers" and says both James Anderson and Stuart Broad could play in the third Test against India.

The tourists have adopted a rotation policy in Sri Lanka and India at the start of a year in which they face such a hectic schedule.

Anderson was outstanding in England's victory in the first Test at M.A. Chidambaram Stadium, but missed out as Broad came into the side for a second match at the same venue in Chennai that was comprehensively won by India.

England's leading Test wicket-taker Anderson is expected to return along with Jofra Archer for the day-night Test at Motera Stadium, which starts on Wednesday, while Broad will be hoping to retain his place.

Chris Woakes and Mark Wood are also in contention to charge in with the pink ball in Ahmedabad, where England need a win to keep alive their hopes of playing New Zealand in the ICC World Test Championship final.

Root refused to be drawn on the make-up of the side and did not rule out unleashing Anderson and Broad for the first time this winter, with England mulling over whether to go with an extra seamer and just one spinner.

Asked if Anderson and Broad may have played in the same team for the last time, Root said: "I think you'd be wrong to ever write off those two to do anything.

"The records they've had, the things they have produced - especially in the last couple of years - there's a reason they are up there with the top three bowlers in the world.

"They are consistently getting better the older they get, they are using their experience to their advantage all of the time and I'm sure there will be opportunities where they get to play together in the near future and much further down the line as well.

"You are talking about two of England's greatest bowlers and the records they set will be difficult for anyone to pass. I feel like there is a lot of life left in them both and you add in guys like Jofra, Woody, Woakes, all of these skilful bowlers around them, we are building a very good team, that they are very much at the front of."

Root added: "They [Anderson and Broad] have got a chance, it's a great selection headache to have all these bowlers putting in performances and giving us real variety so we feel we can pick a team that best suits the conditions and the best make-up we think is going to balance things very well."

Archer was not risked for the second Test due to a shoulder problem but Root says the paceman is fully fit and raring to go.

"He's a world-class performer, he's got all of the skills. He can bowl high pace, swing it both ways and obviously can make it talk off the seam," said the skipper.

"Along with the rest of the guys in contention, it's a very exciting place to be. To have a battery of fast bowlers to choose from is where we want to be and keep improving moving forward."

The fit-again Zak Crawley and Jonny Bairstow will also be hoping to get the nod.