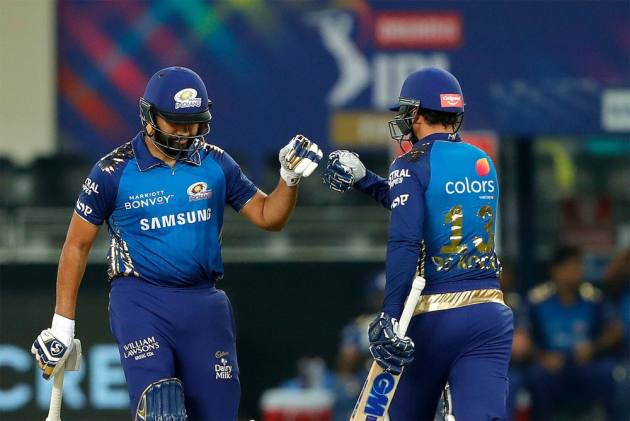 Skipper Rohit Sharma, who returned to lead the side, scored 33 off 30 balls and added 78 runs with Quinton de Kock (55 off 42) for the opening stand after put into bat by KKR at Sheikh Zayed Stadium.

But the five-time champions could manage only 155/6 as KKR fought their way back into the match. In the middle overs, from 10-15, MI scored just 26 runs. Also, the last ten overs resulted in 75.

"Few areas (went wrong). We started really well but didn't get enough towards the back end. I thought it was a good pitch, we failed to capitalise on the start we got and we didn't bowl well at the start," Rohit said after the match.

Powered by stunning knocks from Venkatesh Iyer (53 off 30) and Rahul Tripathi (74 not out off 42), KKR reached the target in 15.1 overs. It was KKR's seventh win against MI.

"We had to get small partnerships but we kept losing wickets at regular intervals, it is not easy for new batters to go in and start hitting the ball. It is something that happened in the last game as well and we will address it," Rohit added.

Back-to-back defeats left Mumbai Indians at sixth position with eight points from nine matches. KKR have also eight points from the same number of outings but are placed fourth thanks to their superior net run rate.

"It is always there at the back of the mind on where you stand, we are still in the middle of the table, so we have to get back and fight and hopefully get some wins on the trot," the 34-year-old said.